This show not only is for the Hispanic population of America, but also teams from other Spanish speaking countries like Mexico and Spain have participated.

Originally a half hour show when it premiered on June 12, 2006, it was expanded to one full hour with two full games played. In 2008, It was later reduced back to a half hour show in order to make room for Dame la Pista hosted by Alessandra Rosaldo.

This show along with Dame la Pista (Give me a Clue) had been cancelled for unknown reasons.

At the beginning of each round, two members of each family come up to the main podium and play a mini-round for control of the question called "Face-Off". The host announced how many answers are on the board (which are always in order based on popularity), and then read a survey question and the first player to buzz-in gets to answer. The player to give the number one answer or have his/her answer be higher than the other player's answer won control. In case of a tie (both answers with the same number of people who gave it) the player who answered first won control. If neither player gave an answer on the board, the players at the main podiums get a chance to answer for control. The family that won the face-off earns control of the question. The controlling family's job is to reveal the remaining answers hidden on the board with each correct answer adding points to the bank above the board. The answer's value is determined by how many people who gave it. Each player on the controlling team in turn gave an answer and if the answer he/she gave is correct, it is flipped over and revealed. Revealing all the answers on the board won the round. Giving a wrong answer at any time earned a strike; getting three strikes caused the team to lose control of the question, giving the opposing family a chance to steal by giving one correct answer. A successful steal won the round, but an unsuccessful steal gave the round to the first family. The winners of the round took all the points in the bank.

The first three questions are  "A Jugar", or single value, the fourth is "Doble", or double value, while the fifth and following questions are worth triple value. The first family to reach 300 points won the game. If neither team reached 300 after the triple question, another question is played, but only the top answer won the game.

The winning family chooses two family members to play. One family member leaves the stage and is placed in an isolation booth, while the other is given 15 seconds (20 in December 2006) to answer five survey questions. If he or she can't think up an answer to any particular question, he or she may pass and come back to the question at the end, time permitting. The number of people giving each answer is then revealed answer by answer after the player is finished answering or time has expired. The player earns one point for each person that gave the same answer; at least two people must have given that answer for it to appear on the board.

Once all the points for the first player are tallied, the second family member comes back on stage and is given 20 seconds (25 in December 2006) to answer the same five questions. The host will ask for another response should an answer be duplicated.

This is an hour-long show, with two families competing in the first half for the right to face the returning champions in the second half, and an extra element was added to the second "Dinero Rapido", "La canasta de tentacion" ("the basket of temptation"), a basket full of items, attached to each of which is a flag saying one of the following:

On occasion, celebrities or other non-civilian teams play for charity. On these shows, the winning team plays for $10,000. Both teams earn a minimum of $5,000.

The weeks of July 16 and July 30, 2007, QDLG held its first tournament, featuring four non-winning families. All money won in Dinero Rapido went into a jackpot, starting at $15,000 with a maximum of $143,000 (assuming all eight families drew the El Triple from "La canasta de tentacion", then scored 200 points and gave the #1 answer for each question). On Monday and Tuesday, the four families faceoff in two quarterfinal rounds, with standard rules. The two winners face off on Wednesday and Thursday, playing two complete semi-final games within the hour, again with standard rules. The two losers from those games play a consolation game for $5,000 in the first half-hour of Friday's show, while the winners play a seven round, 600-point game for the jackpot; the first four rounds are single value, the rest triple.

On March 24, 2008, QDLC held their first ToC, featuring 8 top-winning families. The same rules applied from the second chance tournament, with no "La canasta de tentacion", and a top prize of up to $80,000.

Based on Family Feud by Mark Goodson & Bill Todman

A DVD game was released in 2008 by Imagination. 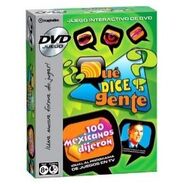