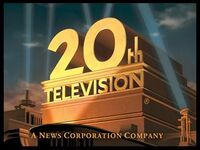 As part of the restructuring that stemmed from News Corporation spinning off its entertainment assets into 21st Century Fox, it was announced on July 8, 2013, that 20th Television will operate under the management of 20th Century Fox Television; it was previously under Fox Television Stations. As a result, the former company's president will now report to the latter's chairmen.

The company syndicates and/or co-syndicates product from partners such as Regency Television and Debmar-Mercury. It owns programming from other production companies and studios they've acquired, including MTM Enterprises, most by Metromedia Producers Corporation, most by Four Star Television and select programming from New World Communications/Genesis Entertainment and Cannell Entertainment.

On March 20, 2019, 21st Century Fox was purchased by the Walt Disney Company, with 20th Television being absorbed into Disney-ABC Home Entertainment & Television Distribution.