25 Words or Less is a new game show that's based on the popular board game of the same name, in which players have 25 words or less to convey clues to their partners.

The show premiered on nine Fox-owned stations for a three-week test run in August 2018.[1] It was successful enough for the show to expand nationally with the national run premiering on September 16, 2019.[2]

Two teams of two celebrities and one contestant compete.

Two teammates are shown a set of five words and must bid back and forth as to how few clues out of a given number they can use to get their teammates to guess those five answers. Upon being challenged to do so, if the teammate can successfully convey the five words in the allotted clues and within 45 seconds, they earn the points. If they don't, the opponents do. Passing is allowed, and it won't count against the clue-giver, and they can't use their hands. The clue-giver can't use any form of the answer as a clue to the receivers. Other illegal clues are what the answer starts with, and the number of letters in the answer. If that happens, the round automatically ends, and the other team gets the points. If the clue giver goes over the allotted clue limit, the round automatically ends as well. Each teammate has a turn per round. The first part of the round is worth 250 points, and the second is worth 500 (dropped to 250 for the national run). Also, during gameplay, the clue-giver is allowed to say how many words the answer has.

Round 2, the celebrities are sent backstage, and the contestants choose their own set of answers for their teammates, five sets of three. In season 2, the celebrities put on noise canceling headphones so that they can't hear the host and contestants during their discussion of choosing their group of words. The greens are worth 250, the yellows are 500, and the reds are 1,000. Each teammate has 20 clues to use within a 45 second time limit, and if a team can guess all the words chosen, they earn an additional 1,000. If an illegal clue is given in Round 2, the word in play is thrown out, and the contestant forfeits the shot from earning the 1,000 point bonus for getting all 5 words, but the round continued as normal.

The round will end for the team automatically if one of the following happens:

1) If the contestant goes over the 20 word set limit.

2) If the team that goes second earns more points than the first team before all 5 words are guessed the round ends on the spot and no additional chosen words after are revealed to the celebrities.

3) If the contestant on the second team gives an illegal clue that would make it mathematically impossible to catch up to the first team point wise.

4) If the first team fails to catch up to the leading team after time runs out. The other team wins by default and doesn't have to play their round.

The team with the highest score wins and advances to the Money Round for a shot at $10,000. If there is a tie, after Round 3, then one final word is played, the first to buzz wins the game. However, if the player buzzed in with an incorrect response, the other player wins by default. For the national run, the loser leaves with a prize worth $200.

In Season 2, a new rule was introduced in which the contestants are playing for a "SuperFan" who registered via the show's website or on social media accounts. There are one SuperFan for each contestant. The losing contestant in the main game still receives their standard consolation prize, while the losing SuperFan they represented in the main game is given a $100 gift card. In the Money Round, if the champion wins the $10,000, the chosen SuperFan that he/she are playing for receives $1,000. If the champion fails in the Money Round (via running out of time/going over the 25 word limit/giving an illegal clue), the chosen SuperFan will receive a $100 gift card.

In Season 3, the SuperFan rule returns, and a new rule is in play where the team that wins and advances to the Money Round will return for the next episode and can continue to do so until they are defeated, regardless of the outcome.

In Season 3, the contestant/celebrity structure changed to one celebrity and two civilians (instead of two celebrities and one civilian). 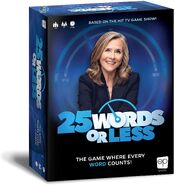