2 Minute Drill was a short-lived, sports-themed quiz show on ESPN based on the popular British game show Mastermind.

Three players competed. The show featured a four-athlete/celebrity panel. The scoreboard was an eggcrate display. Sometimes it malfunctioned, such as a transition from a number. (e.g. when a player gave a correct answer, sometimes a blank digit would show before going to the next number.)

For each contestant's turn, they would be given two minutes to answer sports trivia questions and would have a choice of four categories; each represented by a member of the panel, each pertaining to that panelist's area of expertise, and each containing five questions. If a player got a question right in any category, they could continue to play it or pick another category, but an incorrect answer or a pass forced them to pick another category (although they could go back to it at any time, provided there were still questions left in it). Each correct answer was worth one point, and one bonus point was awarded if the contestant swept a category (got all five right), for a maximum of 24 points in this round.

The lowest scorer at the end of the round was eliminated. Prior to the show, the contestants were also asked a numerical question and asked to give an answer. If there was a tie for low score at the end of this round, the answers were compared, and the player whose answer was the closest to the correct answer advanced.

Two players competed as opposed to three. This time, the scoreboard was computerized to match the on-screen graphics, and the current question and answer would be shown to the home viewers who were playing along. To accommodate this, players could no longer interrupt during the question, and had to wait for the question to be completely read before answering.

For each contestant's turn, again, they would be given two minutes to answer sports trivia questions from four categories. This time, however, contestants would pick an athlete/celebrity, and they would read all of their questions (in their entirety), regardless of whether or not the contestant missed or passed one along the way. The contestant could only select another celebrity after the current celebrity's questions were completed. In addition, each category had only four questions in it as opposed to five, but bonuses were still awarded for sweeping a category; 20 points was the maximum possible score in this round.

Because there were only two players, no one was eliminated at the end of the round.

In this round, the contestants faced a rapid fire series of general knowledge sports trivia questions from the panel for two minutes. One at a time, each panelist asked a question and (starting in Season 2, the contestant had to wait for a question to be completed before they could answer, like in the first round). In Season 1, the panel included host Mayne, who sat in the center position at the panel desk. When the show made its aforementioned aesthetic changes for Season 2, Mayne got his own desk and sat to one side of the panel; he thus ceased to be an active part of the front game (as in, he no longer asked any of the questions). In both cases, there were no categories and the players no longer controlled who asked the questions; the panel fired them off in random order.

The player with the highest score after this round won $5,000 in cash, an "ESPN Experience", and advanced to the bonus round for a chance to double the money to $10,000. If there was a tie after the end of this round, the tiebreaker rules from the previous round (in the first season) were used.

The winner would get a question (usually with more than one part) in a category that they chose as their area of expertise (usually a specific sports team of the past or single athlete). In the Seasons 2 & 3, Mayne called it the "Question of Great Significance." Answering it correctly doubled what they won in the front game.

Also in the Seasons 2 & 3, to heighten the dramatic effect for the question, every light in the studio was turned out except for those focused on Mayne and the contestant, and the panel's table was moved off to the back of the set so the contestant would only be focused on the host.

All of the 51 players in 2 Minute Drill were part of a tournament. After all 17 of the first-round matches had been played, the winners plus the highest scoring non-winner advanced to the quarterfinals, with $15,000 and another ESPN Experience going to the winner, with a chance to double it to $30,000 in the bonus round. The six winners of the quarterfinals advanced to the semifinals, with another Experience and $30,000 (with a chance to double it to $60,000) given to the winners. The finals involved the two semifinal winners and the contestant who had the highest score among non-winners (i.e. a wild card). The winner received another ESPN Experience and $50,000, with a final shot to double their earnings to $100,000 in the bonus round; thus making total cash winnings a possible $200,000 in the event a player correctly answered all of their specialty category questions. Regardless of the outcome, the Grand Champion also received a trophy.

When the rules were changed to just a two-player game, the number of competitors was reduced to 32 (meaning the wild-card rules were eliminated), and a second round (awarding $10,000 to each winner, with a chance to double it to $20,000) was added between the $5,000 matches and the quarterfinals, with the ESPN Experiences only being awarded from this round onward; thus, the maximum cash total the Grand Champion could win was raised to $220,000.

As long as a player kept winning matches, he/she could continue to play; this meant that, if a contestant was a good enough player, they could potentially win more than one tournament. In fact, Willy Gibson from Columbus, OH did exactly that; he won the first two season championships and was eliminated on a tiebreaker after winning two games during the third season. All in all, he won nine ESPN Experiences and $220,000 in cash, nearly all which were from match victories, as he tended to struggle with his Questions of Great Significance about Eddie George or Deion Sanders (which explains why he chose individual categories regarding single athletes rather than past teams, and thus was given questions with more obscure information). Gibson's second tournament championship aired on September 11, 2001 (the same day as the 9/11 attacks, which preempted regular programming network television for an entire week). Gibson's total winnings of $220,000 was the highest that anyone had ever won on a game show that was broadcast on a cable television network at the time; this has since been surpassed on numerous occasions.

The final season premiered on September 17, 2001 in prime time, but was moved to late nights in the middle of its run; it was won by Syracuse University student and ESPN The Magazine writer Adesina Koiki, with Michael Lazarus finishing second.

The sound effect that was used for the clock on this show was originally used on Who Wants to Be a Millionaire? as the sound for the Phone-a-Friend lifeline's clock. 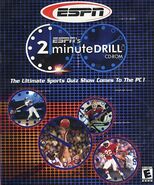 Based on the British game show Mastermind by Bill Wright