"(insert team)/These people have a special relationship, and our celebrities will try to find out what it is, by giving them the 3rd Degree! And here they are: (insert claims and the four celebrities). And now, ladies and gentlemen, welcome the host of our show, Bert Convy!"

3rd Degree! was a short-lived game show that was similar to What's My Line? and Make the Connection.

A panel of four celebrities (who were split into two teams) faced a team consisting of at least two contestants who had a special relationship between them. Two rounds were played for each civilian team; in each round, each team of celebrities had a limited time to question the contestants (giving them the third degree (hence the name of the show)). In the first round, each team of celebrities had one minute to question the contestants, and in the second round, the time was reduced to 30 seconds.

When the time was up, Bert recapped the clues given via the questions asked, then the celebrity team in control then got to guess the relationship, that's when Bert Convy asked the question, "What's the relationship?" when they were getting close to the correct relationship. An incorrect guess won $250 to the contestants, and stumping the panel completely won an additional $1,000 for a total of $2,000.

Peter Marshall (of Hollywood Squares) hosted the pilot, but he was forced out after Bert Convy left his other show Win, Lose or Draw to make room for new host Robb Weller. Marshall sued Burt and Bert Productions in retaliation, but when Convy was diagnosed with a brain tumor and later died, the suit was dropped. The show was once promoted by Marshall in an episode of the short-lived Marc Summers-hosted game show Couch Potatoes. 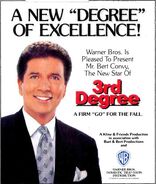 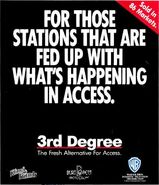 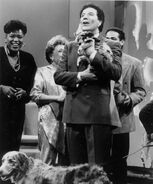 This was Bert Convy’s final game show that he hosted before his death.

The 3rd Degree page from bertconvy.net (from archive.org)
Clips of Marcy Walker on 3rd Degree (along with some gameplay)