All About Faces (not to be confused with About Faces) was a hidden-camera game show where celebrities and their partners viewed everyday people in unusual situations.

Two teams, each consisting of a celebrity and a friend or relative, would be shown a clip of an unsuspecting person placed in an embarrassing situation, recorded by a hidden camera, and as the film was frozen on a closeup of the person's face, the contestants had to wager on how the person would react. For example, a person in a cab is told by the driver that he is nearsighted and color blind; the contestants would guess whether the passenger would exit the cab or not.

Each team started with $50 and could bet as much as they wanted in each round; the team with the most money after four rounds won the game, with both couples' winnings donated to the winning couple's favorite charity. 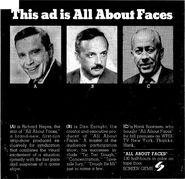 This was one of several Canadian game shows Dan Enright worked on following his post-quiz show scandals exile. He would later make a comeback to American game shows when former partner Jack Barry brought him in to produce the final network season of Barry's own successful comeback series, The Joker's Wild.

The format of guessing the outcome of a "hidden camera" video would subsequently be reused in two later game shows, Anything for Money and Hold Everything!.

A Full Episode of the Show