Almost Anything Goes was a tournament with teams from all over America competing in physical challenges.

Contestants divided up into three teams played a series of wacky and outrageous physical contests. Examples in the first episode included:

In either case, the team with the highest score advanced in the tournament.

In the 1975 season, there were four regional events (North, East, South, and West); each had teams representing cities with populations of 20,000 or smaller from three different states, and each city had to be within 200 miles of the other two. The four winners then met in a national final.

The 1976 season consisted of 14 episodes, broken up into nine episodes where all three cities were from a particular state, three regional finals (East, South, and West; there was no North regional in this season) consisting of three state winners, a national final consisting of the three regional winners, and a "Supergames" where the winning team competed against the winners of the 1975 season and a team of celebrities representing Hollywood.

Based on the French format Intervilles by Guy Lux. 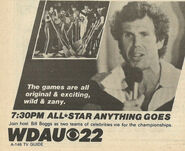 Almost Anything Goes at Game Shows '75 (via Internet Archive)

A full episode from March 1976 (Texas State Championship: Fort Stockton vs. Pecos vs. Monahans)
A WDSU promo from December 25, 1977 (plugging the December 27 airing of the below episode)
Clips of an episode taped May 22, 1977 (The New Mickey Mouse Club vs. Little House on the Prairie; KMSP airing from April 11, 1978)