America's Next Producer was a short-lived reality competition series where it gives a group of ten television and video producers the chance of a lifetime to create the next television hit.

the contestant's abilities were judged weekly by a panel of regular and guest judges. The winner will receive $100,000 cash, a production office in Hollywood and a first-look deal with TV Guide Network. 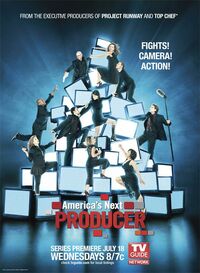 Retrieved from "https://gameshows.fandom.com/wiki/America%27s_Next_Producer?oldid=212915"
Community content is available under CC-BY-SA unless otherwise noted.