Are You Normal, America?

Are You Normal, America? was a short-lived game show featuring two contestants that had to choose what is "normal" or "not normal" based on polls conducted all across America in their quest to win $100,000.

Have you ever peeked at your boyfriends emails? or done your household chores naked? This lively game show will answer those burning questions and more as two contestants compete to win more than $100,000 in their quest to learn if they're normal. Along the way, audiences will be entertained, enlightened and ultimately comforted by the fact that were all pretty abnormal... but that's what makes life fun!

One year later after the show's cancellation, a board game called Are You Normal? was once manufactured and released by Pressman[1][2]in 2013. 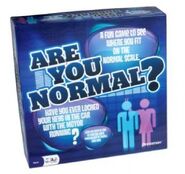