Are You Smarter Than a 5th Grader?

Are You Smarter Than a 5th Grader? is a big money quiz show where contestants answered questions from school-related subjects, sometimes with the help of a 5th grade "classmate".

In each game, the contestant (an adult) is asked a series of eleven questions, spanning ten subjects (such as Gym, Spelling or Art) taken from textbooks for first through fifth grade students. Each question is associated with a grade level; there are two questions per grade, from first to fifth. The player can answer the questions in any order (locking in their answer turns the podium blue), and each correct answer (with their podium turning green) raises their cumulative amount of winnings to the next level (see table at right); after answering the fifth question correctly, they are guaranteed to leave with at least $25,000. If the player correctly answers the first ten questions, they are given the opportunity to answer a fifth-grade bonus question (sixth-grade in the 2015 revival) worth $1,000,000.

Five fifth graders (some of whom are also professional child actors) appear on each show and play along on stage – in general, each episode in a season has the same cast of children. Prior to the show, the children are provided with workbooks which contain a variety of material, some of which could be used in the questions asked in the game. During the credits at the end of the show, a disclaimer states: "Members of the class were provided with workbooks that covered grade school level material in a variety of subjects. Some of the material could have formed the basis of questions used by producers in the show." The player chooses one to be their "classmate", who stands at the adjacent podium and is called upon for assistance in choosing a subject; the other four sit at desks off to the side. Each child acts as the classmate for at most two questions (done consecutively), after which another child is picked from those who have not yet played in that game.

Contestants have three forms of answer-assistance options (two cheats and a save), each available for use once per game (when a contestant uses the first two of the following, the podium turns yellow):

Once all three forms of assistance are used, or after a contestant answers the $500,000 question correctly, the children no longer play an active role in the game. However, they do provide secret answers to be used for dramatic effect.

If the contestant gets an answer wrong (and is not saved, which in this case the podium turns red), they flunk out, and lose all of their winnings (or drop to $25,000, if they had surpassed the fifth question). In addition, they may choose to drop out at any point during the initial 10 questions, which entitles them to leave the game with any winnings they have accumulated to that point.

The rules change slightly for the million dollar subject. The player is only shown the subject of the question before deciding if they will continue or drop out. However, if they choose to see the question, they are no longer eligible to drop out and must answer the question, with no assistance from the classmates or the use of any remaining cheats. A wrong answer on the question will cause the contestant to drop back down to $25,000. If they drop out with the $500,000, they will still be allowed to play out the question for fun to see whether or not they would have won.

If at any point during the game the player drops out or flunks out, they must face the camera, state their name, and declare "I am not smarter than a 5th grader." However, if the contestant wins the million, they will have the opportunity to declare to the camera "I am smarter than a fifth grader!"

"Classroom Club" questions were introduced into the game at the beginning of the second season. These are chosen from questions written by elementary school students, submitted via the show's website. When one is used, the school of the student who wrote it receives a computer lab, courtesy of the show. "Field Trip" questions, introduced in the third season, feature a video clip of a National Geographic Channel correspondent asking the question from an appropriate location somewhere in the world.

In the 2015 revival, the classmates have a "profile page" that is shown on the main screen which shows the child's best subjects and some personal information (favorite celebrities, activities, etc.), similar to those found on social networking sites such as MySpace, Facebook, Twitter, YouTube, etc. "Grade School Give Away" was introduced in the revival to salute elementary school staff and students across the US. This occurs when the contestant reaches the 4th question and if he/she answers it correctly, $10,000 will also be donated to a randomly selected elementary school.

Occasionally, celebrities will be asked to play for charity on the show. The following celebrities have all appeared on the show to win money for charity, with the exception of former Jeopardy! champion Ken Jennings and Nobel Prize winner George Smoot, both of whom were playing on their own behalf. Jennings's stint on the show, where he won $500,000 and passed on the opportunity to play for the million, helped propel him back into the lead for the most money won on game shows by one person in the United States. However, if he had gone for the million, he would've won.

Each season, a new group of children are cast to appear as the "classmates" on the show. Any child cast must be "smart, funny, and outgoing", and must actually be in grade 5 (age 9, 10 or 11) during the television season.

Contestants who make it through the auditioning process are required to sign a one-year contract stating that they will not tell anybody how much money they make, and that they will not release any information about the actual auditioning process, such as the number of screenings, the questions asked by the auditioners, and the actual criteria for being accepted onto the show. However, most of the children are already well established actors.

During every classmate's final appearance on the show (Graduation Night), each classmate receives a $25,000 savings bond.

The gameplay for this version of 5th Grader is the same as the above—games are played by a single contestant, who attempts to answer ten questions—plus one final bonus question—with the assistance of one of three 5th grade classmates (instead of five on the network show), who vary each week, and each child acts as the "classmate" for at most three questions (instead of two on the network show).

Contestants are required to attempt all 10 questions, and do not flunk out simply by answering a question incorrectly, instead losing all money earned to that point. If a player has any money left after the ten questions are asked, they are given the choice to either drop out with the money earned, or answer a fifth-grade bonus question worth 10 times their earnings, to a maximum of $250,000. The money ladder for the syndicated version assigns dollar values per grade instead of for each correct question, regardless of grade. Naturally, the higher the grade, the higher the value, and thus, the harder the question.

If the contestant answers the bonus question wrong, they lose everything. If they have earned at least $2,500 before the bonus question, then they receive a consolation prize in the form of a $2,500 prepaid gift card. If they have earned less than $2,500, the value of the gift card is $250. On celebrity episodes, the consolation prizes are cash donations to the celebrity's favorite charity.

The Nickelodeon version combines elements from the previous versions, with Peek & Copy as the cheats and a top prize of $100,000, the biggest prize in Nickelodeon history.

The game board is now this:

As with the previous FOX runs, a money ladder is utilized, with an incorrect answer removing the top value from it:

Unlike the previous versions, the player no longer chooses a subject. Questions will begin from 1st grade, and progress all the way to 4th grade. And like most game shows that assign dollar values to questions: the higher the grade level, the higher the money, and the harder the question.

If the player has money when the game ends, they get a chance for 10x their earnings by answering five fifth-grade questions within one minute. The last 5th grader will be used for this round; because, the player is given one "Final Cheat". Using that cheat will skip the question; but, it will come back into play with a help from a 5th grader.

Answers are revealed after the time runs out; if the "Final Cheat" is used, both the player and the 5th grader can discuss the skipped question with each other. The player must give an answer after the discussion. A correct answer doubles the money, then triples, quadruples, quintuples and then 10x's the money. If the player plays a perfect game, they win $100,000.

Are you smarter than a 5th grader?
Grab a pencil and a piece of paper.
Meet your teacher, now we're back in school,
So, are you smart enough for the 5th grade?

The Countries that have done their own versions of Are You Smarter Than a 5th Grader? include:

Are You Smarter than a 5th grader was given homage on Sesame Street as "Are You Smarter than an Egg Layer?" hosted by Jeff Bawksworthy (parody of Jeff Foxworthy). Instead of students, in the class, there are chickens in place of the human students. The contestant wins the grand prize, which she thinks is "one million bucks," however it turns out that she wins one million BAWKS. The cast of Sesame Street served as Jeff's co-host during one week of shows.

5th Grader was parodied on MAD TV as "Are you smarter than a tranny hooker?".

Mind of Mencia parodied 5th Grader as "Are you smarter than a wetback?". 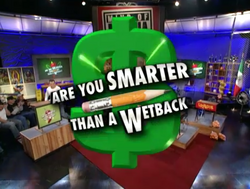 Robot Chicken episode "Hopefully Salt", 5th Grader was parodied in this episode from 2016.