Banko was a game show pilot based on Bingo. It was prompted for a birth in the 1986 Fall season, but it didn't happen. It also had a home viewer contest where the home players got a chance to share a $250,000 jackpot.

Two contestants faced a 25-monitor Banko board. Behind the screens are prizes, booby traps and bonuses. To start, four random screens uncover four prizes and the center free space with the star contained was also given. To earn spins on the board, the contestants played a word association game where they have to spot a common connection between a list of five items. One player gave two clues to his/her opponent who would attempt to solve the puzzle using those clues. Each time the opponent failed to solve it, the clue giver can either stop play or give another clue. The process continued until either all five clues went past the opposing guesser or the puzzle was solved by the opposing guesser. For every clue used, one spin was added to the pot, and the winner of the puzzle round claimed all the spins. When the players went to the Banko board, the lights around the screens flashed and stopped when the player in control pressed down on a TNT-type plunger and yelled, "BANKO!" When a square was hit, a prize and/or a surprise was revealed (the surprises were attached to a prize and were either lose/gain a turn or give the opponent a turn).

The 3 in front of this player indicates the number of spins he must take.

One guess to what these things have in common.

Thanks to a booby trap, Carlese has one spin while Ben has three.

In the Banko bonus game, there were dollar amounts from $100 to $600 on the monitors instead of prizes. The winning player would take as many spins as he/she wished and each time the winner hit a money square, it was added to his/her total, but all the other squares with the dollar amount landed on went blank. If, at any time, the winning player hit a blank space, the game was over and the player lost all his/her cash, which is why that player could stop and keep the money won.

If the player either blanked out all the spaces in a complete line or hit the center square, he/she kept all the accumulated money and won the standard B&E prize package.

As mentioned, a home player contest was to be a part of the show. The idea was that viewers could get Banko cards from gas stations, convenience stores, and supermarkets, which would have been distributed by the Wallace Company. Once a player won a game, viewers could mark off the prizes in the winning Banko line on their cards. If a champion won the bonus game, viewers could also mark off the three prizes that were awarded.

If a viewer achieved a Banko, he/she were to call 1-800-JACKPOT to verify the winning entry and contact information, then mail in the card. 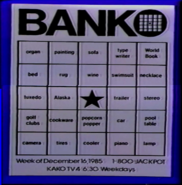 A new contest was to start on the Monday of each broadcast week. All viewers who achieved a Banko and mailed in their winning cards during the week would split $200,000, while five of these viewers would be drawn at random and awarded a further $10,000 each, bringing the weekly prize total to $250,000.

Wink with a Banko Card.