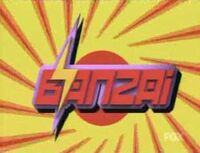 An interactive show on Fox that has a Japanese theme to it. People could play along at home using their WebTV, phone and internet connection. No prizes were rewarded, the only good thing you could win by playing the show was earning a high score that would be shown on the next show.

The show had simple guessing games that you at home had to bet on, such as how many dollar bills can someone stuff in their mouth in a set amount of time, which suitcase has the person's lunch in it, which girl in a dress is really a boy, how long could somebody keep shaking someone's hand, and others.

You were shown the info on the challenge and were told to place your bet in a given amout of time. Once betting ended the challenge began and then you would watch to see if you were correct. Correct answers rewarded you with points.

The show only had 10 episodes, but was axed after only six. The show was targeted by Asian-Americans as stereotypical, leading to its quick demise. Comedy Central picked up the series but only got 5 eps; G4 got the rights and aired the series along with episodes from the original British version.

Although the show states that it is from Japan, it was actually a British format by Gary Monaghan.

The Japanese text used during the show is completely meaningless.