Bargain Hunters was the short-lived daytime game show that combined The Price is Right with home shopping.

Six contestants played three games (two for each game) all focusing bargain prices of everyday items. The winners of each of the games played one final game called Super Savers (referred to by Peter as the Main Event).

Host Tomarken asked "Yes or No" questions about several items with a price attached to each. The contestants' job was to buzz-in and guess if the price attached to the item would be a bargain or not. For example: "Would a 10-speed bicycle with a price of $221 be a bargain?" A correct answer scored a point, but an incorrect answer gave the opponent a point (points were indicated by diamonds lit up on their podiums). The first player to score three points won a bonus prize package.

In the pilot, the two contestants secretly locked in their "Yes or No" choice using the two buttons in front of them. The first player to lock in with the correct answer received $100 in cash, and it took two correct answers to win the game, $200 and the right to play a special game for two prizes. One of the prizes had a bargain price, while the other had the actual price. All the winning contestant had to do was to choose the prize with the bargain price to win both prizes.

The Bargain Quiz from the pilot. Would a lock of Lincoln's hair, wrapped in a pretty ribbon, be a bargain at $125,000?

The contestants lock in their votes.

The contestant on the left has $100. One more correct lock-in and she wins.

The Bargain Quiz winner playing the special game. Which of these prizes is a genuine bargain and which one is actual retail price?

The contestant podiums are recycled from the pilot (with some additions), except they do not show numbers now in this game since there's no money offered in the series.

The two contestants for this game were shown five prizes with prices for each. Four of them were bargains (prices under the actual retail price), but one was not, for it had a price above the actual price (that prize was the trap). Players alternated turns picking prizes that they thought were bargains. Picking a bargain won the prize selected by the contestant in control, but hitting the trap lost the game and gave the opponent the win. Hitting the trap on the first pick gave the opponent the Bargain Trap prize and the game. If neither contestant picked the trap after all four picks (two for each contestant), then a tiebreaker was played to determine the game's winner. In the tiebreaker, the players wrote down how much they thought was added to the actual retail price of the trap. The closest guess won the game plus the bargain trap prize. The winner of the game got to keep all the prizes he/she selected.

The contestant has the prize added to his list.

This is what happens if a contestant hits the Trap. Bummer.

From the series: is the clock or the lamp a bargain?

The contestant chose the lamp, and she is right.

In the event of a tie (both players avoiding the Trap), the contestants write down how much they think was added to the cost of the Trap.

Speaking of Traps, this is what happens when one is hit in the series.

Three prizes with closeout prices selected from stores across the nation were shown one at a time to the contestants. Host Peter would announce the store’s name and location before each item. On each item, the players were given three possible prices, afterwhich they locked in their answers as to what they thought was the actual retail price and a correct answer from any of the players scored a point. The player with the most points out of three won the game. If there was a tie after the third prize, one last prize was brought out. No choices were given, the players simply wrote down their answers and the closest guess won. The winner of the game won all the prizes shown in the game.

The contestants lock in their answers.

The contestant on the right chose the right answer.

And a point is scored. The diamonds here are superimposed rather than being lit up on the podiums.

The contestants lock in their answers…

...and neither of them are right.

But here, both of these contestants got the answer right, but the contestant on the left won the game.

The day's winners of the three main games were shown seven prizes with bargain prices. The prizes had a destination theme. Each contestant held tags with the prize names. During the final commercial break (the prize plugs in the pilot) they selected three prizes each (the ones they thought would save them more money than anything else) by keeping three of the tags and losing the others. The differences of the prizes chosen by each player were then added together, and the player who saved the most money won the game, and all the prizes chosen plus a grand prize vacation to wherever the prizes are linked to.

If a tie occurred, the tied contestants wrote down an estimate of the bargains; the player that came the closest was the winner.

Super Savers Showroom from the pilot.

After each of the first three games, a trumpet fanfare sounded signifying a "Bargain Shopper" segment. Home viewers were offered an item (usually the one(s) shown from the game just played) at a bargain price, and could call a number to order it. The three items were shown again at the end of the show.

The show was a summer replacement and as the first daytime game show to air on ABC since it ended its game show block a year earlier running only nine weeks. It was temporarily replaced with reruns of the sitcom Mr. Belvedere before being permanently replaced with The Home Show on January 18, 1988. The network would not attempt at another daytime game show after Bargain Hunters until three years later when it revived a short-lived version of Match Game with Ross Shafer in 1990.

Bargain Hunters was the final Merrill Heatter production to air on a major network, his future projects will be sold for first-run syndication and cable. 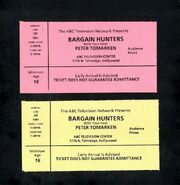