The topic of this page has a Wikia of its own: BattleBots.

BattleBots (also "formerly" known as Comedy Central Sports Presents Battlebots) is a robot fighting competition (as in other combat robot competitions) where competitors bring remote-controlled, armored and weaponed machines which they have designed and built, and put them in an arena to fight in an elimination tournament. The purpose of the fight is for one robot, or "bot", to dominate or disable the other. Not only are the robots at the mercy of their opponents' weaponry, but several obstacles on the battlefield will also damage them.

Robots at BattleBots tournaments were separated into four weight classes. The weight limits increased slightly over time. At the final tournaments the classes were:

'Walking' robots ('StompBots') propelled by means other than wheels were initially given a 50% weight bonus. The rules changed following the victory of a heavyweight StompBot (Son of Whyachi) at BattleBots 3.0. For BattleBots 4.0 and beyond only a 20% weight bonus was given to walkers and the technical rules specified that walking mechanisms did not use cam operated walking mechanisms as they were functionally too similar to wheel operation. Since the rules change, walking robots have entered the competition, but none have achieved any success beyond preliminary rounds.

Matches are three minutes long. During a match, two robots do their best to destroy each other using whatever means available.

There are only two events that cause the match to be paused and people enter the BattleBox. One is the event that the robots are stuck together and cannot separate or that both have simultaneously become immobilized. The other scenario is that one or both 'bots have caught on fire. In that case, the people entering the BattleBox are equipped with a fire extinguisher.

If a robot is unable to move for thirty seconds, because it is too badly damaged or it is stuck on the arena hazards, it is declared knocked out. The driver may also call a "tap-out" to forfeit the match if his or her robot is about to be destroyed. This ends the match ten seconds later; the opposing driver is "asked" (but not instructed) not to attack during the ten-second count.

In about half the matches, both robots survive the three minutes; at that point, three judges distribute a total of 45 points (15 points a judge, 5 points per judge per category) over three categories. The robot with the higher score wins. The judging categories are Aggression, Strategy, and Damage. A robot who hangs back safely from its opponent will not get many Aggression points; one in there fighting the whole time, however, will. The Strategy category is about how well a robot exploits its opponent's weaknesses, protects its own, and handles the hazards. A robot driving over the kill saws will lose points here unless it had good reason to do so, while a robot that can attack its opponent's weak areas will gain points. The Damage category is for how much damage the bot can deal with its opponent while remaining intact itself.

The winner moves on; the loser is eliminated from the tournament.

At the end of the tournament, a series of 'rumbles' or 'melee rounds' are typically held in each weight class, allowing robots that survived the main tournament to fight in a 'free for all' in a 5-minute match. Occasionally there are too many robots for one rumble, and multiple rumbles are held with the top surviving bots competing in a final event. During the Season 5 Heavyweight rumble (the first rumble of that competition), a sheared-off robot part went through the Lexan arena roof and fell (harmlessly) into the audience. Because of this, the rest of the rumbles were canceled due to safety concerns.[1]

The BattleBox is a 48' x 48' square arena designed to protect the drivers, officials, and audience from flying shrapnel and charging bots. It has a steel floor and steel-framed walls and roof paneled with thick, bulletproof polycarbonate plastic. The teams bring their robots in through doorways, which are sealed after all humans have exited. The drivers control their machines from outside the sealed arena.

Arena hazards are intended to make fights more interesting and unpredictable and to reward drivers who can avoid the hazards while pushing or carrying their opponent into them. Hazards from the first five seasons include:

These carbide-tipped saw blades can damage a robot's tires or chassis. In later seasons, red 'throwing blades' were added to increase the chance of a bot being thrown across the arena.

A Kickbot Arena Game and Build 'Em, Bash 'Em were released in 2001 and 2002 respectively by Milton Bradley. 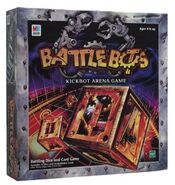 Two video games based on the franchise called Beyond the Battlebox and Design & Destroy were released in 2002 and 2003 for the Game Boy Advance/GBA respectively by Majesco. 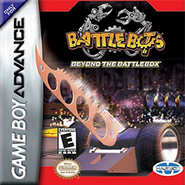 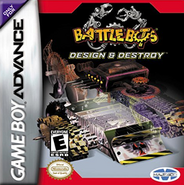 In 2002, the now-defunct THQ was working on a game that would be released for the GameCube and PlayStation 2/PS2 at the time. It was going to be a brawl fighting game, with mini-robots to customize. However, after a couple of years, the game was canceled along with the show in the same year.

During the modern series' hiatus, reruns of the ABC version continued to air on the Science Channel since July 12, 2017. The ABC and Discovery seasons have also been distributed in over 150 countries worldwide.[2]

In Canada, Comedy Network aired the series in primetime in the past. Starting on December 25, 2018, GameTV in Canada started airing reruns of the 2015 version.

Battlebots Channel
Another channel with the old Battlebots episodes