Battle of the Ages is a comedic game show that pits two multi-generational family teams against each other in mental and physical challenges.

Two teams of multi-generational families (consisting of grandparent, a parent and a child), challenge each other in a game of knowledge & stunts, for a chance to play for $10,000. With the opportunity to pick a competitor from the opposing team and test their knowledge on a specific era, this game show will get families talking and laughing while they learn more about each other.

The game is played in three different rounds, all of which test their knowledge of what they know about the past.

The first round pits one member from each team, representing their own generation against each other in a face-off-typed quizzer.

To start, a computer animated wheel, calibrated with various categories is spun. Whatever it lands on, that's the subject to play for the players on deck. Some categories have a weird character attached. The character/host involved poses clues/questions to the players who will buzz-in whenever they are ready to answer. The player to win the category scores 100 points. The process is repeated for the next two sets of players; so there is 300 points available.

This round is played with a special stunt which only one of the teams can play. The two teams will bid against each other as to how many correct answers they can give in 60 seconds. They bid back and forth until one of them reaches maximum number of answers allowed or one team challenges the other. The team that wins the bid plays the stunt. If they are successful, they score 250 points, otherwise, the points go to their opponents.

Round three is also played with a special stunt, which changes every show. Each stunt awards up to 1,000 points, with every correct answer scoring a fraction of that amount, depending on how many correct answers there can be.

The team with the most points at the end of the three rounds wins the game and a chance to play the Timeline Challenge for $10,000.

The winning family is faced with seven years (one from each of the past seven decades) each with two events. One member of the winning family will have 60 seconds to choose which event happened in the appropriate year. He/She makes their choice by pressing one of two buttons corresponding each event. His/Her partners can help by yelling out which event is correct. When he/she is finished, JD announces how many years they got correct. Then the team must decide to either bank that number of correct answers and the money attached to it or make some changes based on how many they got wrong, using the seconds they have left, at the risk of losing money for making incorrect changes. Regardless of the decision, the answers are checked one at a time. Each correct answer wins $1,000, and getting all seven right wins $10,000. 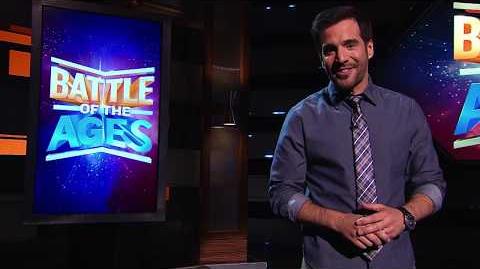 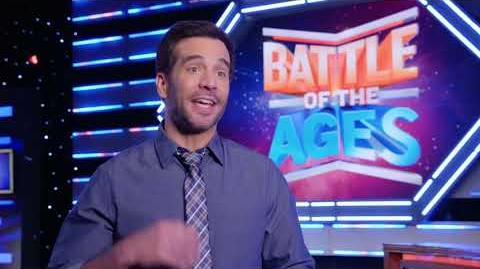 Battle of the Ages - Questions With JD