Betty Marion White Ludden (born January 17, 1922, in Oak Park, Illinois, died December 31, 2021 in Los Angeles, California) was an American actress, author, comedienne, singer, and TV star. She hosted her only game show, Just Men! in 1983 for which she won an Emmy award; she became the first female to win the Emmy for Outstanding Game Show Host before Meredith Vieira won her Emmy award twice for her hosting duties on the long-running syndicated version of Who Wants to Be a Millionaire? (or Millionaire for short) in both 2005 and 2009 respectively 22 years later. She is best remembered for her role as Rose Nylund on The Golden Girls. As co-star Rue McClanahan passed away in 2010 along with Estelle Getty in 2008 and Bea Arthur in 2009, Betty was the last surviving "Golden Girl". She met (and later married) Password host Allen Ludden in 1963. Allen passed away in 1981. That same year, Betty appeared on a special celebrity week of Password Plus; she was joined by Dick Martin, Lucille Ball, and Desi Arnaz, Jr. She won three Alphabetics: twice with Dick, giving the clues both times, and once with Lucy, receiving the clues. Betty White has also starred in other sitcoms, such as The Mary Tyler Moore Show, Mama's Family with Vicki Lawrence, The Betty White Show alongside future Magnum P.I. star John Hillerman (who died on November 9, 2017) and the former hit TV Land series Hot in Cleveland originally running from 2010 until 2015. These days, Betty is hosting her own NBC hidden-camera series, Betty White’s Off Their Rockers (based on the Belgian television show Beni dorm B******s), which was just renewed for its second season in the mid-season schedule. On July 11, 2013, The Hollywood Reporter said that NBC has canceled the series, citing a drop-off in ratings and low DVR viewership. However, on October 18, 2013, it was announced that cable network Lifetime has revived the series for a third season with an all-new twenty-episode order. This version is expected to premiere on February 28, 2014. But in midseason, BWOTR took a three-year hiatus and resumed broadcast until September 12, 2017.[1][2]

White died on December 31, 2021, at the age of 99, just seventeen days shy of her 100th birthday. Despite the rumors of her not receiving her COVID booster shot, her official cause of death was a stroke that she suffered on December 25, 2021.

Since 2015, the game show channel Buzzr aired a special-themed marathon block called a "Betty White Christmas" featuring various episodes of classic game shows that featured her appearance. The event has been annual since then, with all Betty White episodes on Christmas Day.

The marathon was orginally planned on January 15, 2022 but due to her death it was pushed back to January 8 featuring episodes of Match Game & Match Game PM. On January 16, it's Password, Password Plus & Super Password and finally, on January 17, it features Ms. White's appearances on To Tell the Truth, Trivia Trap, Whew! and more spanning from 1972 to 2016.

Check out that cool Password Plus jacket Betty's wearing! 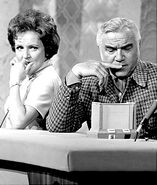