Bingo America is an American game show that aired on GSN, featuring two contestants as they competed to win up to $100,000, as well as letting at-home viewers print bingo cards at GSN.com that allow them to play along with the show to win money.

Created and produced by veteran television producer Andrew Glassman, the show was originally hosted by Patrick Duffy and Crystal Wallasch, both newcomers to the game show field. Critics did not like Duffy's or Wallasch's hosting jobs as well as had been hoped, and when its second season premiered on October 6, 2008, they were replaced by Richard Karn and Diane Mizota, respectively.

Two contestants competed on each episode. On each turn, a Bingo ball would come out of the hopper and a question was asked. Each ball had a number from 1 to 75 and a letter in the word "BINGO" printed on it. If the question was answered correctly, the player would earn the letter from that ball and the number on the ball would be added in dollars to a bank, which started at $500 (e.g., if G-50 comes out, the bank increases by $50). If the letter was a duplicate already earned by the player, no extra letters would be earned. The first player to spell out BINGO from the earned letters won the game.

If time ran short during a game, it would shift to a 50/50 round. In this round, the remaining questions of that game would be asked in a multiple-choice fashion, with two possible answers given. If a player answered incorrectly at this point, credit for the question (and the given letter, if applicable) would automatically be given to his or her opponent, but no money would be added to the bank for that question (in the earliest-taped episodes, money was still added to the bank even if a player got a question by default).

For the sponsored weeks of the show's run, a Free-Space Ball with the sponsors’ logo would act as a wild card in the game.[1] The player who answered a question correctly when that ball came out could choose any letter, and $100 would be added to the bank.

The winner of the match won money in the bank and advanced to the Bingo Bonus Board for a chance at $100,000.

This bonus round used two different formats (one for each season).

In this season, each number on the Bingo Bonus Board represented a cash amount or a prize, ranging anywhere from a junk prize (labeled the "FUN" prize, which could be either a supply of Pink's hot dogs or a pet rock; this was only won once), up to a grand prize of $100,000 cash. Every prize was repeated at least twice on the board. The player chose one number at a time, and won the first prize to be revealed twice.

In this season, 55 of the 75 spaces had cash values hidden behind them, while 20 had "wrecking balls." The contestant would start with the "B" row (the only row without any wrecking balls). After each selection, the player could either leave the game with the money accrued to that point, or risk those winnings by picking a number from the next row. If a wrecking ball was chosen, the game would end immediately, and the player would lose all the money accumulated during the round. Originally, there was just one wrecking ball in the I row, three in the N row, six on the G row, and ten on the O row, this was later changed to two on the I row, four on the N row, six on the G row, and eight on the O row (a few other episodes had a 1-2-5-12 format).

If the contestant made five successful picks, he/she would keep all of his/her accumulated bonus money and earn the right to activate the Bingo Sphere one more time for the Superball. If one of the contestant's five chosen bonus numbers matched the one on the Superball, his/her bonus round winnings would be augmented to $100,000.

At-home viewers were also allowed to play along with the show by printing out bingo cards available at GSN.com. GSN characterized the play-at-home portion as an "instant win sweepstakes." Once the taping of the show was complete and all of the randomly drawn numbers were recorded, a computer would generate thousands of bingo cards. In all, 100 winning cards were created that viewers could then download and print for the broadcast of the show a few weeks later.

To win, players had to mark every number on their card that was announced during the show. The host would repeat the numbers throughout the game and when a player got a "Bingo," they would be directed to GSN.com to claim their prize.

All winning viewers would earn $50 (except for select promotional "Winner Wednesdays," where the amount increased for some lucky winners). In Season 1, GSN held a Tax Day promotion that raised the prize amount to $100. GSN also awarded $100 to lucky winners on the second night of the show as a way of giving back to fans after GSN.com experienced unexpectedly high traffic during the show's second airing.

At-home viewers could earn an instant win if the in-show contestant selected both of their "Bingo Bonus Numbers" during the "Bingo Bonus Round." The Superball from Season 2 applied to the Bonus Numbers as well, even if it wasn't a winning number.

GSN did not place winning numbers on its website after the airing of the episode, unlike its predecessor, National Bingo Night. 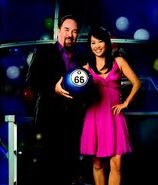 A DVD game was released by Imagination in 2008.