Blackout was a short-lived word game show where two contestants and their celebrity partners blackout (censor) the opposing teams' descriptions of words to prevent them from solving puzzles. Keep in mind that this has nothing to do with the equally short-lived 2012-13 reality competition series Total Blackout.

At the beginning of a round, a fill-in-the-blank puzzle was revealed. The puzzle in question was a bad pun with four missing words (one of them being the punchline word). Then a member of one team recorded a 20 second description of a word showing on his/her monitor.

The partner of the giver wore headphones and had his/her half of the podium moved up so (s)he couldn't see the screen nor hear what the description was. When the time was up, the partner was released from isolation and listened to a playback of the description, but there was one big catch: one member of the opposing team was equipped with a plunger (or "blackout button"); when pressed down, the recorded description would be "blacked out" (i.e. muted / censored). The member received a base "blackout time" of seven seconds; the timer went up one second per duplicated key word (not including generic pronouns or prepositions).

If the player could guess the word, even with the "blacking out," the team won the word. If not, the opponent, who had the benefit of having heard the whole description, would take a guess. Should the giver give away the word, any part of it or even a form of it or make the sound of the word or a generic sound while recording (signified by a buzzer, later a "BOING!!!!"), the opponents automatically won the word. If neither player identified a word, play simply continued to the next word.

Supposedly, Charlie would be blacking out the description for seven seconds. But wait…

…Markie repeated two important clues; so that means Charlie gets to blackout for nine seconds.

Charlie blacking out the description.

Two puzzles were played on each show. On the first puzzle, the celebrities described the words and the contestants guessed them, while on the second puzzle the roles were reversed.

The first team to solve the two puzzles won the game; if the game ended in a tie, a tiebreaker word was played. The contestant with the higher dollar amount/most correct words scored (or the winner of a coin toss in case of a tie) had the decision to either play or pass after being shown the word. The person describing had only 10 seconds this time to describe the word, while the person blacking out had three seconds (with the one-second addition for a repetition remaining in effect). If the partner of the describer guessed the word, (s)he won the game for the team, but if the partner was wrong or if the describer did an infraction mentioned above, the opposing team won the game.

Both contestants kept their cash, but the winner of the game along with his/her celebrity partner also won a chance to play the "Clue Screen" bonus round. During the next break, the winning team decided amongst themselves who would give and who would receive (more contestants wanted to give).

In this round, one member of the winning team faced the clue screen while their partner had their back turned. The player facing the screen was shown a category and saw up to six clues, with one appearing every two seconds; not only that, (s)he alone was also shown the answer to the puzzle, to get an idea of how many clues to be revealed. When (s)he judged that there was enough information for a solve, (s)he would yell "Solve it!", causing the clues to stop revealing and signaling for the partner to turn around, see all of these clues at once, and take a guess (or pass). If the player facing the screen gave away the answer to the puzzle, the puzzle was thrown out.

Each correct answer awarded $250, and if the team could solve five puzzles within 70 seconds, the contestant won $10,000; the total possible winnings were $10,800 if the same contestant correctly identified all eight words in the first two rounds. ($10,900 if it were the first eight words plus the tiebreaker word. for a total of nine.)

Contestants remained on the show until they were defeated or have won five games. Although the network's winnings limit was $75,000 at the time the show was filmed, the maximum amount a contestant could win was $54,000.

Blackout is the only daytime game show in history to replace and be replaced by the same show. Near the end of the show's run, CBS announced that it would begin development on a revival of Family Feud (Combs), which did not begin airing until July 4, 1988. After numerous complaints from viewers of the Dick Clark-hosted version of The $25,000 Pyramid, CBS opted to bring back that show for a final season of 65 episodes.

Robb Weller of Entertainment Tonight (which was ironically what Bob Goen would go on to do) hosted the pilot. Robb did go on to host Win, Lose or Draw in 1989 after previous host Bert Convy left to do 3rd Degree.

Some of the show's sound effects were previously used on the game show Whew!, which ran from 1979 to 1980.

Like a few other Jay Wolpert game shows, it had a cartoon opening; this one was of a hand doodling around while a voice with that hand could not stop talking. The other hands were tired of hearing too much chatter, so they put out a blackout button to stop the chatterboxing. The voice of the nonstop talker was that of Jay Wolpert's wife; her voice was a sped-up tape recording.

This was the last network daytime game show by Jay Wolpert, as all future shows were either in syndication or cable.

This was the second (and final) Jay Wolpert creation that ended on April 1; five years ago his first was Hit Man (which aired on NBC) in 1983.

A brief clip of the intro to the Weller pilot can be seen in the opening credits of the 1994 ABC TV miniseries called Stephen King's The Stand.[1] 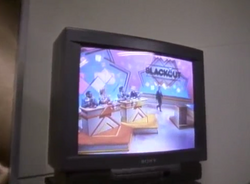 Blackout was one of the few Jay Wolpert-produced game shows that was exported internationally.

After the American version was cancelled, the show was exported to Spain as Sin Verguenza (Shameless/Without Shame) hosted by Angeles Martin aired on TVE from 1992 to 1993, which later served as the basis for the short-lived British ITV game show Take the Plunge hosted by Su Pollard, which aired from 4 October (October 4) until 6 December (December 6) 1989.

A Dutch version of the show ran on the EO Network (Evangelical Broadcasting) in the Netherlands from 1991 to 1992, hosted by Bert van Leeuwen.[2]

Blackout is a Jay Wolpert Production…
1st Wolpert Logo (Lasted for only one week) - This was previously used in the 1983 NBC game show Hit Man.

2nd Wolpert logo - This would be the look for future Jay Wolpert projects.

…in association with Taft Entertainment Television Inc., the company that owned Hanna-Barbera Inc.

“From Television City in Hollywood, this is Johnny Gilbert/Jay Stewart speaking.”