Robert Kuehl "Bob" Goen (born December 1, 1954) is an American game show emcee and television personality, best known for his work on Entertainment Tonight (co-hosting with Mary Hart) between 1993 until 2004. He most recently hosted GSN Radio, a short-lived interactive radio game show along with his wife Marianne Curan.

Goen was born in Long Beach, California but was raised in the Los Angeles suburb of Lakewood, California. In a 2009 Game Show Awards Red Carpet, he stated when he was 5, he always dreamed of becoming a gane show host, with the encouragement of Bob Barker, Bill Cullen, Bob Eubanks, Tom Kennedy, Geoff Edwards, Wink Martindale and Monty Hall among many others, and his dream came true as a young adult. Goen graduated from Lakewood High School in 1972, years before he graduated from San Diego State University in 1976 with a degree in telecommunications and film. In 1977, he used his college radio experience to land a part-time job at KFOX radio in Long Beach, which led to his first full-time job as a disc jockey/producer for KPRO in Riverside, where he was promoted as a director. In 1981, he came to television becoming a sports anchor at KESQ-TV, the ABC affiliate in Palm Springs, California. 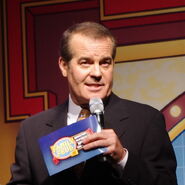