The topic of this page has a Wikia of its own: Bob Stewart wikia. 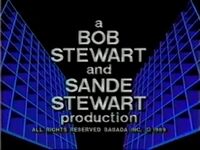 Created by Bob Stewart for Goodson-Todman[]

Bob Stewart-Sande Stewart Productions never had an official logo; Just an in-credit text. Near the end of its life, the name was arranged like a pyramid.

Most of the time the credit would be over a celebrity or a contestant during their closing credit chat.

The Face is Familiar

Three on a Match

The Face is Familiar

Money in the Blank
Community content is available under CC-BY-SA unless otherwise noted.
Advertisement