"What you are about to witness is the most intense game show ever created. What makes it so intense? Look what I'm standing next to. Now many of the greatest action films of all-time, the most exciting moment is when the hero has to diffuse a ticking bomb by cutting the right wire. Well, in the game, you're about to see we create that moment with every...single...question. Get ready for BOOM!"

Boom! (or BOOM!) was a game show based on an Israeli format of the same name that fuses family entertainment with the thrill and intensity of a blockbuster action movie.

Full of comedy, color, tension and excitement, the series is a general knowledge quiz show that challenges teams of three players to diffuse the ticking slime-bombs by cutting the wires relating to the correct answers and leaving the wrong answers untouched. Get it right, and the players win big money. Get it wrong, and after an intense countdown, the slime-bombs detonate, showering the players and portions of the audience with mystery goop that could be anything from guacamole to mashed potatoes, forcing the player to be out of the game.

A team of three players has to answer six questions that have multiple correct answers but only one incorrect answer. One player from the team is chosen to cut the wires on a bomb that correspond to the correct answers. There is a time limit for every question; the clock stops whenever a wire is cut; after which a three-second countdown commences. If a wire corresponds to a correct answer, play continues until all correct wires are cut. Once all the correct wires are cut, the bomb is successfully defused and the team banks the money for that particular question. If a contestant cuts the wire that corresponds to an incorrect answer, or if time runs out before all correct wires are cut, the bomb "explodes" (i.e. the substance inside the bomb will spray on the contestant). This will result in the contestant's elimination from the game, and no money will be banked by the team for that particular question.

Since there are three players in the game, if two players are eliminated from the game and only one remains, he or she must face the remaining questions. If the third player cuts the wire that corresponds to an incorrect answer at any point in the game, the game is over and the team leaves empty-handed. If no one is eliminated after all six questions are answered, the team can either take the money that they have or risk half of their winnings for the Mega Money Bomb question, which would offer contestants the opportunity to quadruple the money they have.

The rules change slightly for the Mega Money Bomb question, where the bomb has ten wires (adding pink, gold, and platinum wires to the previous seven): seven which correspond to the correct answers, and three which correspond to the incorrect answers. The team has 90 seconds to cut all seven correct wires. If a contestant manages to cut all seven of the correct wires, the bomb is defused. In addition, money comes out of the bomb, and the team wins quadruple of the money that they banked over the first six questions. However, if any of the three incorrect wires is cut, the bomb "explodes" and the team's bank is halved. The maximum amount of money a team can win is $500,000.

On June 25, 2015, a mobile game version of the show was released by Screenz and Keshet DCP for iOS and Android where you were allowed to play along with the show as it airs. The app features real-time play along and a 24/7 Play anytime game modes offering greater values to the viewer and a true live experience. Both games modes puts players in the driver's seat allowing them to play simultaneously with the contestants in the studio while competing with other players at home. The app offers an engaging, interactive experience with dynamic graphics, a tournament mode, leaderboard and opportunities for additional branded content. 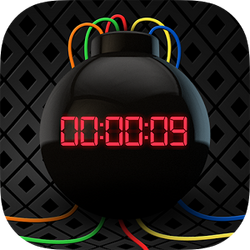 Countries that have previously (or currently) have aired their versions of Boom! include: