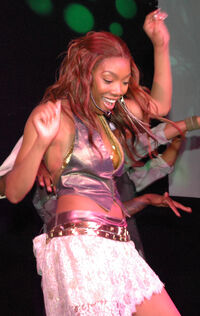 Brandy Rayana Norwood (born February 11, 1979), also known as Brandy or Bran'Nu, is an American recording artist and entertainer. Born into a musical family in McComb, Mississippi and raised in Carson, California, she enrolled in performing arts schools as a child and performed as a backing vocalist for teen groups. In 1993, Norwood appeared in a supporting role on the short-lived ABC sitcom Thea and signed with Atlantic Records. Norwood then went on to star in her own successful sitcom Moesha. In later years, Brandy was a contestant on Dancing with the Stars and then becoming a judge on the first season of America's Got Talent.