Game Shows Wiki
Register
Don't have an account?
Sign In
Advertisement
in: Puzzle, Gambling, 2 out of 3 match,
and 13 more

"This is the personalized license plate of a (insert identity). If you can figure out that it says (insert answer), then you're ready to play BUMPER STUMPERS! And now, the driving force on Bumper Stumpers, Al Dubois!"

The object of the game was to solve the "Super Stumper", a special license plate with seven blank spaces. At the start of each game, the Super Stumper was revealed in the center monitor of a seven monitored game board. Host Al read a clue (which was always someone or something the plate(s) belong to) to the puzzle, and then the first blank space was revealed.

To reveal another space, the teams had to win a series of jump-in rounds. On each jump-in, two plates were revealed in the top two monitors, and a clue to one of those plates was read. The first player on either team to buzz in chose which of the two plates the clue belonged to, either the left or the right. A correct answer gave his/her partner ten seconds to solve the plate (originally a choice to either let the partner play or challenge the opposing team), but an incorrect answer gave ten seconds of solving time to the opposing team. In either case, solving the plate won a chance to solve the Super Stumper, but failure to solve the plate gave the opponents ten seconds to solve it. If nobody solved it, another jump-in was played. In later episodes, a green light in between the top two monitors was lit, to indicate that it was time to buzz in; the light was not lit and the buzzers didn't work until after the clue was read.

The first team to win a best two-out-of-three game match won $1,000. Originally the team only had to win one game and doing so won $500, plus $500 for each game not won, and losing two games eliminated the losing team from the show. In either case, the winning team went on to the bonus round for more cash.

There were three bonus games used throughout the series.

The bonus round was split into two halves. In the first half, the winning team had 30 seconds to solve seven stumpers. Each correct solve increased the odds of winning the bonus round, and solving all seven plates won $2,000. However, not solving any of the stumpers ended the bonus game right away. At the end of the bonus round, the host told the players how many they got correct and would then review which plates got revealed. Chase lights animated around the monitors to signified the solved puzzles and the chase lights that didn't animate were what got missed.

In the second half, the winning team played a game called "The Final Stumper". It was played if at least one stumper puzzle did/didn't get solved in the first half. The Final Stumper started when seven gameboard monitors spelled out the word "Stumper" (S-T-U-M-P-E-R). There were two versions of the Final Stumper.

Behind the letters in "STUMPER" were money amounts ranging from $100-$500 and stop signs. $500 always went first, with the lower money amounts added for each subsequent solve, starting at $100, $200, $300, $400 and ending with a second $500 space. The number of stop signs were determined by how many stumpers were missed in the first half. The winning team picked off letters and whatever money amounts revealed were theirs. Reaching a total of at least $500 doubled the money (to a maximum of $1,800), but hitting a stop sign ended the bonus game; however, unlike most Barry & Enright shows using this type of bonus format, any money earned was theirs to keep.

At the same time the main game switched to a two-out-of-three format, the Final Stumper was altered a little. Though the first half was the same, a square marked "WIN" was now added to the money amounts. "WIN" always went first with the money amounts added in descending order starting with $500 and going down by $100 each time in $100 increments. Plus, finding a stop sign now lost any money won up to that point, but the winning team always got an option to stop and keep the money after each amount. Reaching at least $1,000 or finding the "WIN" square won $2,000.

In the final bonus game of the series, one member of the winning team was isolated offstage, while the other had 30 seconds to solve up to five stumpers but without clues to the stumpers. Each one was a clue to a puzzle, and for each one solved, the team won $100. When time was up, the plate solving player had a decision to make; he/she can either let the isolated player solve the puzzle with the clue stumpers solved for triple value or keep whatever they won. The unsolved clue stumpers were blanked out at that time. Whatever the decision, the isolated player was brought back out to solve the puzzle. When taking the risk, if the puzzle solving player successfully solved the puzzle in 10 seconds, the team won triple the cash for a maximum total of $1,500, but an incorrect solve or expiration of time lost the money.

Whatever the outcome & whatever the bonus round, the winning team got to face another (or the same) team afterwards. Winning teams retired from the show after winning five matches. Unlike past Barry & Enright game shows, five time champions on Bumper Stumpers did not win a car.

Near the end of the run, airing in September 1990 and rerun in December 1990 on USA, a "Tournament of Champions" was held, with 16 undefeated teams over the show's three seasons returning to compete. The winning team received an additional $10,000, while $5,000 was awarded to the runners-up.

In 2007, a WarioWare-lke online minigame called Lightspeed 2 (produced by PacDude Games) features a minigame based on the show where like it two licenses plate belongs to only one person and you have to figure it out which one it belongs to. 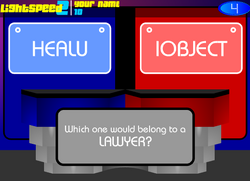