These are the many products/merchandise/goods that were brought to us due to the success of Card Sharks.

So far Endless Games have released two different versions that were based on Card Sharks.

To celebrate the show's 25th anniversary at the time, this was based round it[1][2]. Despite it used a logo of the 2001 revival, it was based on (and had the same rules of) the 1980s versions. In addition, the opening poem from the 1978 version was placed on the back of the box. The game contains a red deck and blue deck; however, players can use Bicycle and Hoyle decks, if they so choose. The questions and answers are in a book that also includes the instructions (484 questions total).[3] Like any game show board game, it also contains a pack of play money. 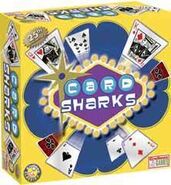 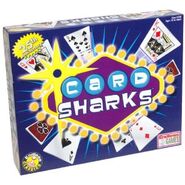 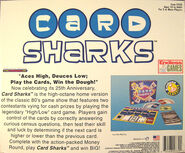 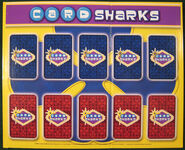 A new version is[4][5]based on the current Joel McHale-hosted ABC primetime version (Which by the way, the host is on the cover of the box). Gameplay is similar, but with some changes to make it more so like the modern version. For starters, the main round is now done in one go, with 7 cards, instead of the "best 2 out of 3 with 5 cards" rule the '02 game employed, with no cash bonus for exact numerical guesses. Questions are now included as their own individual cards (70 cards with 5 questions [enough for a full round] for 350 total questions) instead of being included inside the instructions. In addition, the Money Cards round is played exactly like the modern version, meaning individual Money Cards, a different board design for the Money Cards round (including both a space for the Money Cards, as well as a small space in the bottom to represent the poker table seen on the show), as well as no play money, with bets being done using the included (or printable[6]) poker chips. 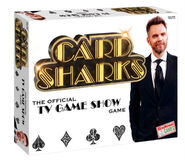 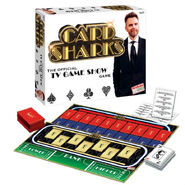 It even had it own TV commercial that was released in the same year. 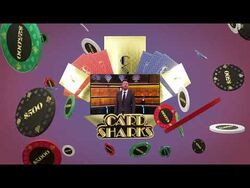 In the summer of 1988, Sharedata/Softie released a computer version was for the Apple II series[7][8], Commodore 64/128[9], and IBM-PC computer systems; although based on the Eubanks/Rafferty version, the host resembled Perry. The game used the single sudden-death question tiebreaker in the main game and the Joker car game following the Money Cards. If a contestant got an exact guess on a question in the main game, he or she won a $100 bonus, instead of the $500 bonus on the show. Also, unlike the show, the game did not use the educated guess or audience poll questions. 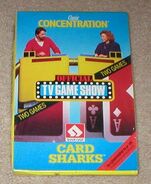 A single-player online version was once released by the now-defunct website Uproar.com. Even though its logo was the same as the short-lived 2001 syndicated revival, its gameplay was more like the 70s and 80s versions (minus the poll questions).

The company have produced some online games that were based or centered around Card Sharks:

In 2003, a WarioWare-like game called Lightspeed[10]featured a minigame of Card Sharks where like the show, you had to guess if the next card would be higher or lower.

In 2007, the sequel Lightspeed 2[11]also featured a minigame of Card Sharks (mainly the "Money Cards") where you have to guess the other three cards in a sequence would be higher or lower.

In 2021, an online game based on the Money Cards bonus round[12]from the current McHale version where it had just one row of seven gold cards was released.

In 2004, the now-defunct website, GameShow24.com, had an online beta game based on the original Perry version. Its logo (seen on the bottom of this description) is based on the original 1978-81 version while its theme song is a mixture of the '78 and '01 themes and uses TPIR-like gameplay instead of poll questions. The site also features The Hometown Price Is Right and two unreleased game show-based games of Press Your Luck and Let's Make A Deal.[13] 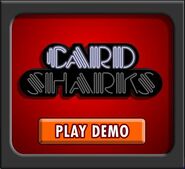 In 2005, GSN, the network that reruns Card Sharks daily (Excluding the Bullard & McHale versions) had its own short-lived interactive version where you were allowed to play with the show.

In 2021, a brand new online version was released by Arkadium[14] where it mostly plays like the Perry, Eubanks/Rafferty version (including the main theme songs) from the 70s and 80s respectively. However, just like the McHale version on ABC from season 2, it had a row of seven cards for the champion (red) and the challenger (blue) to work with instead of five. NOTE: If you win the main game, in order to play the Money Cards you'll have to sign in & register. 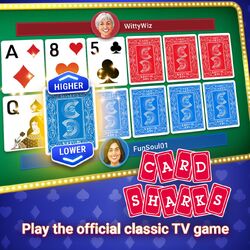 A version for mobile phones was released on June 1, 2005 by Telescope Inc. The logo was based on the short-lived 2001-2002 version; the theme music was a MIDI-style remix of the 70's version, while its gameplay is based on the 70's and 80's versions. More poll questions were also available for download.[15] 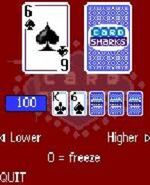 In 1988-89, GameTek[16][17][18]was going to release an NES (Nintendo Entertainment System) port based on the Eubanks/Rafferty version at the time. However, it was scrapped later on. Judging from the picture, this was from when the car frame was added to the Eubanks version, as the Rafferty version was already axed.

$32,000 win in the downloadable game, combining elements of the Perry and Eubanks eras, and using the red cards for the champion. The link to the download is here.

Here's what you don't want: a BUST, and this one occurred before the Big Bet. This picture uses the blue cards for the challenger-turned-champion.

A $32,000 win with the blue cards for the challenger-turned-champion.
Add a photo to this gallery

The people at FlashGames also had their own Money Cards game.[20]

$16,000 and the Ace of Spades for the Big Bet. You know where this is gonna go, based on the version this game comes from. Note the blue cards, for the challenger-turned champion; returning champions always got red cards. (Note: When this game was released, it had MIN and MAX buttons for minimum wager and maximum wager; those have since been removed.)

$32,000 win with blue cards for the challenger-turned-champion; even better it was done without changing one card.

$32,000 win with red cards for the champion; even better it was done without changing one card.

$32,000 win with red cards for the champion in the online Flash game, and also the new buttons and WAGER readout. As noted, the MIN and MAX buttons were removed.
Add a photo to this gallery

Retrieved from "https://gameshows.fandom.com/wiki/Card_Sharks/Merchandise?oldid=234488"
Community content is available under CC-BY-SA unless otherwise noted.