Carnie Wilson: Unstapled was another short-lived reality show that focuses on the life of singer and first host of the GSN revival of The Newlywed Game Carnie Wilson. as viewers get to see some of the struggles she encounters as a game show hostess, entertainer, a wife, mother and her goal for losing weight.

As mentioned above, the show focuses on the life of Carnie Wilson (daughter of Brian Wilson, founder of The Beach Boys) and former singer of 1990s music group Wilson-Phillips as it takes place at Carnie's residence in the Los Angeles area and viewers see some of the struggles she encounters as a game show hostess, entertainer, wife of Rob Bonfiglio and mother of two children (Lola and Luci). Wilson reveals on the show that she has been overweight since the age of four and focuses on her goal for losing weight.

Somedays my life, my job, my kids
Make me wanna cry!
Until then, baby
I'm just gonna have to have another piece of pie!
Don't you know?
Clothes are tight!
It's alright!
Will I get some tonight?
Can I hold on for one more day,
Things might go my way.
Will I get through this day? 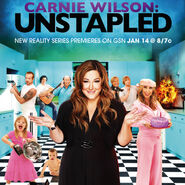 Opening of the show

Retrieved from "https://gameshows.fandom.com/wiki/Carnie_Wilson:_Unstapled?oldid=132326"
Community content is available under CC-BY-SA unless otherwise noted.