Cash Tornado was a lottery game show pilot designed to show off a format reminiscent of The Price is Right (games based around a core concept, in this case luck) for licensing to various state lotteries. A sales presentation was edited together on April 5, 1994.

Players were chosen from the audience. There were 36 contestants in all, divided into three groups of 12 (Keno, Winning Hand, and Treasure Hunt, each corresponding to winners of that specific Lottery scratch-off ticket). Each group of 12 sat under a sign with the name of the scratch-off game on it and wore t-shirts that match the colors of those signs. Each contestant held a lightbulb torch and they were activated by spinning a wheel. As the wheel spins, columns of three lights flashed.

Wherever the lights stopped would be the players chosen to play a qualifying game for the right to play a mini-game for lots of money.

Contestants released the pendulum, it would swing, then become attracted to one of the magnets—the player won the amount of money associated with the magnet. After the first swing, that space was replaced with a "Zonk".

The contestant then re-released the pendulum—ideally, winning more money in the process. If the pendulum landed on "Zonk", the contestant lost all of the money accumulated in the first swing.

After three swings, another "Zonk" was placed over the amount from the second and third swings (or, if the contestant did land on a Zonk, it was simply left alone), bringing the maximum total number of "Zonk" spaces to three. The largest dollar amount on the table was multiplied by five.

The contestant could either choose to risk their money on one final swing or stop with what they had; hitting a "Zonk" would cause them to go bankrupt, but hitting a money space added the money total to their total. Maximum payoff was $137,000.

A contestant was shown a board with four racecars - red, yellow, blue, and white. He/She was then shown a board of 16 numbered boxes, and was asked to call out numbers, one at a time. Each time a car was revealed, the car matching the one just chosen moved one space. There were four of each color and finding all four of one color ended up the game and awarded the contestant a cash prize - $1, $5,000, $15,000, or $100,000.

Before the game, the contestant playing decided which car was more likely to finish first and the amounts were assigned to the cars based the contestant's predictions.

The contestant would pull a lever that would launch a ball to the top of the board, through swinging paddles, through a series of pegs, and into one of eight slots at the bottom of the board. Landing in an empty slot was worth $5,000. Each empty slot accumulated an additional $5,000. If a ball landed in a slot that was already occupied, he/she was given a Strike.

The theoretical maximum payoff was $640,000, but this would require that each of the first three balls land in the same slot, followed by each subsequent ball landing in a new slot. The odds of this happening were approximately 1 in 213,044.

The three money winners of the evening competed against each other in this, the final game of the night. Similar to the children's game KerPlunk, a large container was placed center stage containing 30 ping-pong balls. They were suspended in the top of the container by 12 numbered rods. One at a time, each player drew a number from a bag, and the corresponding rod was removed from the container. Depending on their position inside the container, some of the balls could fall to the bottom. Each contestant was staked with $100,000. On each player's turn, s/he lost $10,000 for every ball dropped to the bottom.

The contestant who dropped the last ball immediately went bankrupt. Once any contestant lost all his/her money, s/he was eliminated from the game. The last remaining player with money won the game and kept their remaining money.

The cues from this show would later be recycled into the Doug Davidson version of Price, as well as Illinois Instant Riches and the many other shows Cash Tornado spawned. 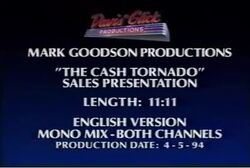 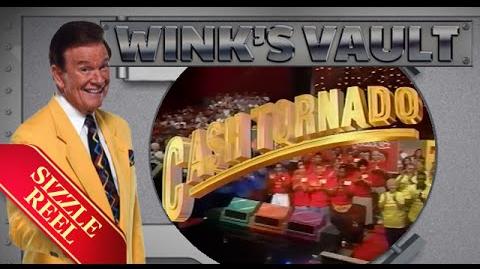