Catch 21 was a blackjack-themed game show on GSN similar to Gambit; the title itself is a pun on the best-selling novel Catch-22.

Three contestants competed in a game of blackjack with questions (à la Gambit). The object of the game was to make a blackjack hand total 21 (hence catching 21), or come closer to 21 than the other contestants without going over. Anything over 21 was a bust and eliminated the contestant from the round.

The player with a correct guess also won the right to see another card dealt by Padilla. When the card was revealed, the player in control had a choice to make. He/she could either keep the card and add its value to his/her hand or pass it to one of his/her opponents in an attempt to bust that player. When a player exceeded 12, liked his/her hand total, and was in control, he/she could "freeze" (the player also had that option after getting the question right). Ties were not allowed: once a player was frozen on that number, the number was his/hers. If there was only one contestant left playing, no more questions were asked; only cards were dealt.

The two players with the highest scores advanced to Round 3, and the third-place player was eliminated from the game. If there was a tie for 2nd place, the two contestants played a high card tiebreaker. Each contestant decided (sight unseen) to keep either the first or second of the next two cards in the deck (both would then be shown), and the player with the highest card won. An ace was always high.

This round was played the same as before, except that points were no longer awarded for correct answers or winning the round. The player with the best hand won the game, $1,000, one more Power Chip, and the right to play for $25,000. Starting in Season 2, two Power Chips were awarded in this round; one for winning the round and an additional one (two for celebrity episodes) for winning the overall game.

The idea was to catch a 21 exactly. Doing so in a single hand awarded $1,000. Doing it twice awarded $5,000. Catching a 21 in all three hands awarded the top prize of $25,000. If at any time the contestant busted on any hand, they forfeited all of the money earned in the bonus round. To prevent this from happening, after each safe card, the winning player received the option to stop the game and keep whatever he/she won in the round in addition to the $1,000 for winning the front game; the contestant only earned the right to stop when a Power Chip was not used recently.

For this version, Ribeiro returned as host, but with new co-host/dealer Witney Carson, who was his partner on his winning season of Dancing with the Stars. The new series premiered on Monday, October 14, 2019, at 6:00 p.m. EST.[1]

The gameplay is subtly altered. Questions are no longer multiple-choice, just general trivia. Unlike the original, where Ribeiro had the question cards, the questions are now shown on the screen (presumably he read them from a screen situated off-stage). No points are awarded either; winning a question only earns control of the next card, and winning one of the first two rounds guarantees your place in Round 3 (now called the Head-To-Head Round) and a Power Chip to take to the final round.

All three players still play the first two rounds, so the same player can win both rounds and both Power Chips. If this happens, the other two players participate in a "High Card Playoff": both players are asked another question. The player who answered it correctly wins control of the first of the following two cards in the deck, which they may keep, giving the second card to their opponent, or pass to their opponent and keep the second card for themselves. Like in the original version, the player with the high card (with Ace being considered High Card) advances to the Head-to-Head Round; in case of a tie (both players got the same value of a card), the process is repeated until a clear winner emerges.

Reruns of the original run have aired on Bounce TV.

Like The Price is Right, Merv Griffin's Crosswords, and a few others, Catch 21 continues to use the old production company name after the founder's death. 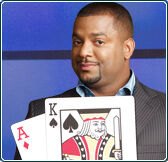 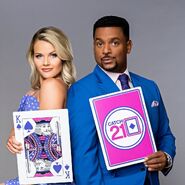 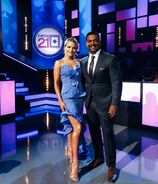