Four celebrities played each game, separated into two pairs (usually each pair included one man and one woman). The rules of the game were known as "best ball"; for each frame, both members of each team would roll a ball on their own lane. If neither teammate rolled a strike, then the one who rolled the worse shot (either a bigger split or whoever knocked down fewer pins) would then roll for the spare on the other lane. Players alternated lanes after each frame.

Each team was tied to a person in the audience, who would win prizes based on the score the pair accumulated in the game if they won. The winning partner would receive increasingly valuable prizes (mostly home appliances) if his/her team scored 120, 150, 180, or 210 points (with the highest category usually resulting in the partner winning a car or vacation; the top category was reached only once in the show's history). There was also a bonus prize for the team that bowled the most strikes, and (in later episodes) a super bonus prize for a team who bowled a turkey (three strikes in a row).

To accommodate the half-hour time slot, the sixth and seventh frames of each game were typically not televised.

In Episode 70, the team of Michael Cole and Tige Andrews scored a 266, just 34 points shy of a perfect score of 300. Their game easily surpassed the 210 score needed to win a new car, which was the top prize at that time. Jed Allan remarked that the previous high score was a 206, which was reached by Greg Morris and John Beradino in Episode 10. Cole and Andrews recorded a "mark" (strike or spare) in every frame bowled, as did Morris and Beradino.

The lowest score recorded during the original series is presumed to be a 66 by the team of Charles Nelson Reilly and Robert Clary in Episode 142. Reference was made at the show close by Jed Allan to the pair having "beaten" the long-standing record of 67 which was bowled by two of the Lennon Sisters.

In 1987, 26 episodes of The New Celebrity Bowling were produced for national syndication. Jed Allan again hosted.

This show was the by-product of a 1969 syndicated special, The Celebrity Bowling Classic, which ran for 90 minutes.

A record album called The Celebrity Bowling Christmas Album was released in 1973, where a couple dozen clips from the syndicated series, as well as a recording of Jingle Bells made from bowling sound effects were featured. (NOTE: This short, crudely made novelty record may have not been released commercially.) 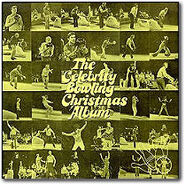