Celebrity Charades was a show with two teams of celebrities attempting to act out famous phrases.

Two teams of celebrities competed in a game of acting out comedic phrases, with the team who managed the better time by the end of the show receiving $500 for their favorite charity.

Four rounds were played and in each round, one member of each team attempted to get his/her partners to say one of those phrases by acting it out as fast as possible within 75 seconds. The team to do that in the least amount of time won the round, and the team with the fastest time for all their phrases won the game.

This version of Celebrity Charades stemmed from a private series of parties. Here, there were five celebrities on each team instead of four, and their jobs were to act out famous movie titles.

On the show, the two celebrity teams were sent into separate rooms. In each round of play, a set of five movie titles to be guessed were predetermined by the producers. One person from each team was given the first title; then each had to run to a section of the house where his/her teammates were waiting, then act out the title. The team member who guessed correctly subsequently would run to the central location where the host was waiting with the second answer to be guessed. This went on for all five answers. When all the answers were guessed, the team had to come up with the common theme that connected the answers together. The first team to do so won the round.

There was no prize awarded to the winner. Instead, all participants agreed to donate their appearance fee to a charity of their choice. 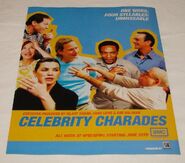 The commercial cue from the original 1979 version was also used as a main theme for two Goodson-Todman produced shows: Mindreaders in 1979, and the unsold pilot Puzzlers in 1980.

A sped-up vamp version of this show's theme was used on Tom Kennedy's version of The Price is Right for the Switcheroo game in the 1980s as well as the theme for the unsold pilot Babble, in which Kennedy also hosted.