Game Shows Wiki
Register
Don't have an account?
Sign In
Advertisement
in: Themed Quiz, Popular Culture, No Penalty for Wrong Answer,
and 17 more

The topic of this page has a Wikia of its own: Celebrity Name Game Wiki.

Celebrity Name Game was a game show that paired celebrities with contestants who tried to identify famous names of actors, singers, pop culture figures etc. This was based on the board game called Identity Crisis.

Two teams of two civilian players and two celebrities attempted to identify celebrities and fictional characters in a race to see who could get to $3,000 first and then play for $20,000.

Each team was presented with two categories, each containing ten names. One partner would give clues, trying to get the other partners to guess the names. (which was the same concept used for Password and Pyramid) The players have to say the whole answer entirely or else it didn't count. Successful guesses won them money. An illegal clue voided that name. Each turn lasted for 45 seconds.

The only restrictions were:

The civilians would go head to head at a Family Feud-like podium and Ferguson himself would give the clues to names under one more category, usually in a comedic way of sorts. The contestants would buzz in to make a guess. If neither contestant buzzed in after a while, Ferguson would start giving out clues that were normally illegal, all the way up to simply saying the name. A right answer scored more money, while a wrong answer awarded the money to the opponent. The first answer was worth $100 and future names increased the value by that amount. The first team to reach $3,000 won the game, kept the cash, and advanced to the bonus round to play for the $20,000. If no one reached $3,000 when time was called, the team in the lead at the end of the round won the game. If both teams were tied at the end of the round, one final name was played; the first team to buzz in with a correct answer won the game, but buzzing in with an incorrect answer resulted in a win for the other team.

In the bonus round (which was played similarly to the "Fast Film/Picture Round" from The Hollywood Game), there was no category, all names were generic. The names were hidden behind ten numbered squares. Some of them hid pictures of the names which only existed from season 1. The civilians would take turns giving the clues to both celebrities. One civilian was placed in a soundproof booth while the other gave the clues. The current giver would start describing when a name or picture was exposed. If the celebrity receivers were correct, the name would stay revealed and passing on a name re-concealed it. The round lasted for a total of 75 seconds, with the first civilian being given 45 seconds, and the second player, 30 seconds, should the first player not get all ten. The second part of the bonus round was not played if the celebrities identified all ten names in the first part of the round. Any illegal clue given by the first player meant that name was thrown out and replaced by another for Player #2. Any illegal clue given by the second player ended the bonus round immediately. Getting all ten augmented the front game score to $20,000; no consolation prize was given for less than ten.

If you can't give a good description of a person, break down the name. If you saw "Fiona Apple" as an example, and you don't know who she is, give a clue for one of the 2 words you know already.

You can say how many words are in the answer to give the receiver(s) more information.

If you think you're going to say part of the name, you can use the word "blank". An example: if "Marilyn Manson" is the name you see, use a fill-in-a-blank strategy like Charles ___ and killed a bunch of people.

Another good strategy to use is think of an opposite or a synonym for the correct word in the answer. It don't matter if you're facing a 2-word answer, a 3-word answer or a 4-word answer. Example: "Quiet Riot" Another word for "silent" or opposite of "loud".

Who says you have to use your voice to get the receivers to say the name? You can use body gestures which was done on Body Language or to the classic game Charades.

Who says you have to use only your real voice? You can fake an accent or act out a voice impression.

A board game based on the sh ow featuring a smirking Craig Ferguson on the cover of the box was released by PlayMonster[1](formerly Patch) in 2016. 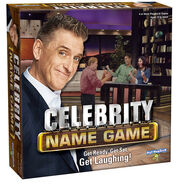 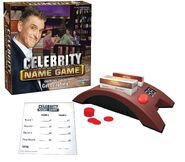 NOTE: Despite having a different name, this was the third home game that was based on a board game itself, the first was TV Scrabble by Selchow & Righter in 1987 then Trivial Pursuit Game Show by Parker Brothers in 1993.

From 2015 until 2016, an online version on YouTube featuring various internet stars as contestants was hosted by Damien Washington.[2]

An Australian version of the show with the same name, hosted by Grant Denyer (who was then later replaced by Rove McManus from only 10 episodes who has previously hosted the one and only American game show Lie Detectors on GSN in 2015) airing on Network Ten from 2019 until 2020.

In 2016, a Portuguese version called Duelo das Estrelas "Duel of the Stars" airs on MundoFox, hosted by Silvio Nascimento.

The show have been seen on Pop and Buzzr respectively.

Originally, in June 2011, it was reported that actors Courteney Cox and David Arquette's Coquette Productions were preparing to pilot a new, hour long game show for CBS' prime-time lineup known as Identity Crisis based on a board game of the same name produced by Out and About Productions. However, plans fell through at the last minute.

Fellow comedian/game show host Frank Nicotero was the warm-up man for this program.

Before Celebrity Name Game, host Craig Ferguson hosted an April Fools Day episode of The Price is Right in 2014.

Additionally, Craig Ferguson won a Daytime Emmy Award for best game show host (because of CNG) in 2015 and again in 2016 respectively. He was nominated in 2017.

On Hollywood Game Night, their bonus round also called Celebrity Name Game shares its same name with this show.

Despite having a three-seasoned run, this was the third most successful "board-game-turned-game-show" in history, the first was Scrabble (1984-90 version) hosted by Chuck Woolery and the second was Family Game Night hosted by Todd Newton. Additionally, this was the second "game-show-based-on-a-board-game" that was distributed by its company Debmar-Mercury, the first was the short-lived Trivial Pursuit: America Plays hosted by Christopher Knight (a.k.a Peter Brady of The Brady Bunch fame) in 2008.

The podiums used for the celebrities and contestants looked similar to that of the Dawson version of Family Feud.

When the Season 2 premiered, there were four new features:

The pictures of real people and fictional characters were discontinued after Season 1 due to the fact that some of the clue givers accidentally blurted out part of the name when describing who it was.

On February 21, 2017, when Craig Ferguson mentioned that he would be the clue giver for the 3rd round, the 1988-1994 theme of Family Feud played as both shows are owned by FremantleMedia North America (now Fremantle).

Although Celebrity Name Game went off the air in 2017, its YouTube channel published more video clips after a 4-year hiatus.

Based on the board game Identity Crisis.