Chain Letter featured contestants that were teamed up with celebrities in a word game in which the first letter had to be the same as the last letter of the previous word.

Two teams, each with one celebrity (team captain) and a studio contestant, competed against each other.

A category was stated such as "Items you might find in a lady's handbag" or "Gifts for the boss's birthday". The first player would have ten seconds to give a word pertaining to the category. Then, the next player would have ten seconds to give another word in the same category using the last letter of the previous word as the first letter of the new word. Each player alternated giving answers until a bad answer was given or their guessing time ran out causing the chain to be broken. The team earned one point for each acceptable answer with the opposing team earning one bonus point when the chain was broken and control of the next category.

At the end of a three-minute game, the team with the most points wins the game, a $100 bonus and the right to play the bonus round.

The championship team was given a chain word and the players alternated forming words in a similar manner from that word. The contestant earned $20 for each acceptable word until the chain was broken.

The first pilot was Three of a Kind, taped on January 11, 1964 with Jack Whitaker as emcee and co-creator/producer Monty Hall as announcer. The game was played similarly but with three players, one celebrity, and two "occupational themed" contestants competing against each other in a two-round format.

The first round featured three categories and the opposing team's choice of category for the controlling team. The last category was not played. Each acceptable response was worth $10 and each team member alternated giving responses, with no last letter-first letter restriction, until they could not give anymore.

The second round played with the eventual Chain Letter rules but with $20 for each acceptable word. There was no bonus round.

The second attempt, now with the familiar title, taped on December 4, 1964 with Dennis James as emcee. This game was played with four civilian contestants alternating. Each player naming items pertaining to a category at $5 per acceptable item. Each player who gave the most acceptable responses in a round earned $25-$100 bonuses per round. Five rounds were played, each with a different category. 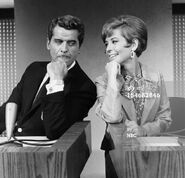 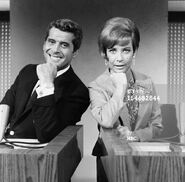 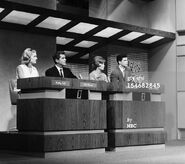 Closing credits of the 1966 pilot

Retrieved from "https://gameshows.fandom.com/wiki/Chain_Letter?oldid=216349"
Community content is available under CC-BY-SA unless otherwise noted.