PILOT SPIEL:
"This is Justin, age 7; this is Elizabeth, age 7; this is Marcus, age 6; and this is Kate, age 6. These children and others like them will try to make you understand what they're talking about on Child's Play! And here's the host of Child's Play, Bill Cullen!"

"TRIPLE PLAY"-ERA SPIEL (1982-83):
"This is (insert children and ages). These children and others like them will try to make you understand what they're talking about on Child's Play! And here's the host of Child's Play, Bill Cullen!"

"TURNABOUT"-ERA SPIEL (1983):
CHILD: "My name is (insert name). I'm in the (insert school grade), and I'm from (insert state)." ANNOUNCER: "You will meet (insert child's name) and these other children today, as we play the game of kids and definitions, Child's Play! And here's the star of Child's Play, Bill Cullen!"

Rest of Spiels: "Thank you all very much, and welcome to Child's Play, a game for grown-ups/where children interpret the words that grown-ups try to guess."

Child's Play was a game show where two contestants watched video clips of children trying to describe a word and then had to guess what it was for points.

Keep in mind that this should not to be confused with the popular 1980s horror movie franchise or the charity organization of the same name.

The main game was the same except with these following differences:

Player podiums from the pilot. One guess with the bullseye, two guesses with the candy sticks.
Also in the pilot, the word is displayed on the contestant's podium as opposed to the screen.

Oh no, Julie said the answer and gave it away! Naughty Julia! Shame on you!

Buzzing in the pilot.

In the first round, a word was given to the viewers at home, and a video clip of a child defining that word was played. Any words that were too incriminating or the answer itself were censored.

Once the clip ended, the contestant had a chance to guess the word; a correct response earned one point. If he/she was incorrect, his/her opponent viewed a clip of another child defining the same word. If the opponent was wrong, control passed back to the first contestant, who saw one final clip (usually of a younger child, and the answer usually not that hard to guess by this point). If he/she was still wrong, Cullen announced the correct answer and no points were awarded.

The first round continued, with the contestants alternating control on words (originally the winner of the previous word played first on each new word), until the second commercial break.

In earlier shows, the word is huge and only displayed briefly.

This is what happens when the kid say the word.

Contestants’ Area from the series. For a brief period, the champion’s single-digit score displayed on the right as opposed to the left.

The second round was known as the "Fast Play" round. Both contestants were given the opportunity to guess what word the child was defining by hitting a buzzer to interrupt the video clip and guess the word. If the contestant was correct, he/she received two points; if incorrect, the rest of the clip was played and the opponent was given a chance to guess.

A kid describing a word.

Buzzing in in the series.

In the first week, correct answers in "Fast Play" were still worth one point. After the school bell rang the first time, correct answers were worth double, or two points. Also, upon stealing, the stealer would see the whole clip rather than starting from where it left off. This rule was discontinued in favor of the rules above.

When the school bell rang, the game was over and whoever was ahead in score was the winner. If there was a tie at the end of the game, a tie-breaking word would be played. If a contestant buzzed in with the right word, he/she won the game; as in regulation play, if he/she buzzed in with a wrong answer, the contestant was locked out, and his/her opponent got a chance to listen to the entire description of the same child, before taking a free guess.

The winner of the game won $500 and the right to play the bonus round.

The bonus went through two formats in its season long run, but they both had the same time limit of 45 seconds and the same payoff of $5,000.

The winning contestant had 45 seconds (60 in the pilot) to guess six words correctly. Each word had three written definitions by three different children ("Child A," "Child B," and "Child C"). The contestant had to choose one of the three children, and after seeing the definition, supply a guess or chose another child. If, after seeing all three definitions, the contestant couldn't identify the word, he/she had to say "pass" to move on to another word.

Each correct guess was worth $100, while getting six before time expired won $5,000. 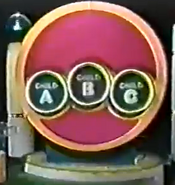 The ABC Game Board from the pilot

Early Triple Play Board. Similar to the one from the pilot but they are now in a straight line.

A full shot of the later Triple Play Board.

Later Triple Play Board. Now there are silhouettes of children. 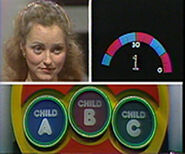 Triple Play in progress from the pilot. This was The ABC Game.

Triple Play in progress from early in the format in the aired series. Can you identify the word before this player does?

Triple Play in progress from the aired series. The contestant playing is future actress Anne-Marie Johnson.

Champions returned until they were defeated, had been on the show for five days, or exceeded the CBS winnings limit (at the time) of $25,000. Theoretically, a championship player could win no more than $27,500.

Here are a list of countries that did their version of Child's Play:

The following Monday after the cancellation of Child's Play, Press Your Luck with Peter Tomarken took its time slot. In addition, the show was originally going to be replace with another Goodson-produced game show Star Words hosted by Nipsey Russell but lost in the process.

On the short-lived game show Rock & a Hard Place one of the rounds was also called Child's Play.

A video game originally going to be released for the Atari 2600 by The Great Game Company in 1983, but due to The North American Video Game Crash of '83 plans for it were scrapped and it has never been made, nor released at the time.

Before They Were Stars[]

Lori Beth Denberg starred in one of the episodes in Child's Play long before her days at Nickelodeon.

Other stars who appeared on the show before they were famous included:

The buzz-in sound was the same sound from Family Feud.

The wrong answer buzzer was used when time ran out to answer a question on Child's Play’s replacement, Press Your Luck.

The correct answer bell is the same one used on The Price is Right and was also used to signal spins being added to contestants' scores on the aforementioned Press Your Luck.