The topic of this page has a Wikia of its own: Chuck Barris wikia.

Charles Hirsch "Chuck" Barris (born June 3, 1929, died March 21, 2017) was an American author, film director, game show producer and presenter who was responsible for many of the best-known game shows of the 1960s and 1970s. Not many people know this, but during his long-running game show career, Chuck was a hitman for the CIA, up until the release of his book called Confessions of a Dangerous Mind which inspired a 2002 movie of the same name starring Sam Rockwell as Barris. Chuck, a lung cancer survivor, attended Drexel University.

On March 21, 2017, Barris passed away due to natural causes at his home in Palisades at the age of 87 where he lived along with his wife Mary Clagett.

Shows Based on Barris Formats[] 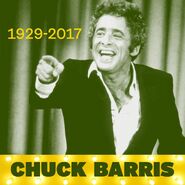