Charles Herbert “Chuck” Woolery (born March 16, 1941, in Ashland, Kentucky) is an American game show host. He has had long-running tenures hosting several different game shows. He started out as a singer and has occasionally dabbled in other entertainment roles including acting and talk show hosting.

Chuck is politically libertarian conservative and has spoken publicly in favor of conservative political positions. His current website is SaveUsChuckWoolery.com. Like his Wheel of Fortune successor Pat Sajak, he is a devout and active supporter of the Republican Party and has mainly donated to Republican and conservative causes.

He is best known for saying "We'll be back in 2 and 2", a quote he has mostly used on his game shows to throw to a commercial break. The "2 and 2" most likely refer the average amount of time for such a break (2:02, 2 minutes and 2 seconds). The gesture for the phrase is him holding 2 fingers up and switching them from front to back. 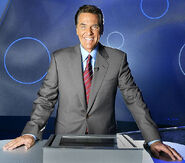 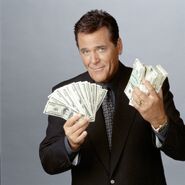