Season 1 Spiel: "From Los Angeles, the entertainment capital of the world, and the birthplace of (insert whatever was made in LA first), it's time to play Click! And now, here is the master of the mouse, Ryan Seacrest!"

Click was a game show based on computers and the internet where three teams of two teenagers competed in a game of questions & answers to win cash.

Three teams (Green, Red, and Yellow) of two teenagers played three rounds (referred to as "levels"), where the aim was to answer questions worth varying amounts of money. 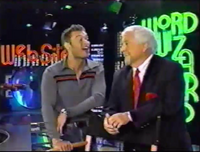 In each round, the contestants stood at podiums facing a large video wall (which acted as a computer); each screen of that wall had an icon with a symbol representing a category on it. A flashing cursor would bounce around the board and stop when someone "clicked the mouse" (pushed down a large red button in the center of the podium at the central station, aka "The Motherboard"). A question was then read, and the teams earned cash for correct answers.

The Motherboard and the Giant Computer

Two main categories (called "Stations") were featured in the first season (one was "Website", the other "Word Wizard"); regular general knowledge questions from specific categories would be answered at "The Motherboard", the station where teams played the game. The Hard Drive station was added in Season 2 and was where the regular knowledge categories were answered. "The Motherboard" was only used for clicking the mouse on one of the three stations.

NOTE: These general knowledge categories were asked at the motherboard during Season 1.

Each team in turn would facing the computer, and they each had 60 seconds (originally 90) to answer as many questions as possible. The value of the questions were either $25, $50, $75, or $100. One icon on the board was called "Double Click" (which was the show's logo appearing twice (similar to the "Daily Double" on Jeopardy!, which was also created by Merv Griffin)), where the team could double their current score with a correct answer. A team would win $100 if they had no money after a Double Click answer.

During the second season, regular questions were no longer at the motherboard; instead they were now at another station called "Hard Drive". One player stood at the motherboard clicking while his/her partner ran to one of the three stations. Also, the "Word Wizard" was renamed the "Chat Room". The "Web Site" stayed the same.

Starting with the lowest-scoring team, each team kept control of the mouse as long as they answered questions correctly. If at any time they missed a question, the opposing teams at the main podiums could buzz in and steal control. Landing on a "Virus" (renamed "Crash" in the second season) meant a question was asked to the teams at the podiums for control. If neither team got the question right, the first team kept control. Question values were still worth anywhere from $25 to $100.

Oh Crap! Don't feel too bad, I blew my top for getting a crash!

Ryan now did the clicking (he had his back to the board while he did it during Season 2), because all three teams had a chance to play every question. One member of each team stood at a different station while their partners remained at the podiums. After the station or category was chosen, the player at the appropriate place would hear the question and have a chance to answer for $100. A wrong answer meant that the players at the podiums would have a chance to buzz-in and take the money.

After several questions, an off-stage voice would then yell, "SWITCH! SWITCH! SWITCH!" Then the players would swap places with their teammates and more questions would be asked. Three switches took place during the round, and at the end of the round, the top scoring team won the game and played the bonus round. All three teams kept their money, and the losing teams also received consolation prizes.

In case of a tie for first place, or a three-way tie at the end, one final question was asked, and the team who buzzed in with a correct answer advanced to the bonus round.

In the bonus round, the winning team attempted to correctly answer three questions within the time limit to win a pair of Monorail computers. In Season 1, they had 45 seconds to answer any three questions correctly, and each correct answer was worth a small prize. In Season 2, they had 60 seconds, but the three correct answers had to be given consecutively to win the computers. Each correct answer was worth $100, win or lose (regardless of whether or not they were consecutive).

The show was taped at The Production Group Studios in Los Angeles, CA in the first season, but for the second season, production moved to Jonas Jensen Studios in Seattle, WA.