College Bowl (formerly known as College Quiz Bowl, then G.E. College Bowl, and now Capital One College Bowl) was the first-ever televised quiz bowl. The format of this show would spawn a multitude of other academic bowls all over the nation. The series is built & credited as "The Varsity Sport of the Mind".

The format was simple. Two four-member teams representing various colleges and universities competed; one member of each team was its captain. The game began with a "toss-up" question for 10 points; the first player to buzz in got the right to answer, but if (s)he was wrong, the other team could try to answer (if a player buzzed in before the host finished reading the question and was wrong, the team was penalized 5 points). Answering a "toss-up" correctly earned the team the right to answer a multi-part "bonus" question worth 20, 25 or 30 points (sometimes 35); the team members could collaborate, but only the captain was allowed to actually give the answer. The game continued in this manner, and was played in two halves. During halftime, the players were allowed to show a short promotional film of their school; or they might talk about career plans or the like. The team with the most points at the end of the game won a $1,500 scholarship and the right to return the following week against a new team. The losing team won $500. Five-time champions retired with a grand total of $10,500. From 1967 to 1970, the winners earned $3,000, the runners-up received $1,000, and five-time champions retired with $19,500.

The 1978 and 1979 championship specials were televised to various stations. The national champions won $5,000 and competed in the world championship for $7,500. Art Fleming also hosted the CBS radio version which aired from 1979 to 1982.

The 30th anniversary special aired on NBC on May 23, 1984. The one-hour special consisted of two semifinal matches and the finals match with the winning team earning $20,000 in scholarship grants with $5,000 going to the runners-up and $2,500 to the semi-finalists.

Twelve schools compete for $1 million worth of scholarships. Each school fields a team of three players, as well as one alternate who may participate only if a teammate is forced to withdraw from the tournament. Four teams complete in each of three qualifying matches, with two games per match and two teams per game.

A set of categories are available in each round, containing one toss-up question (now called a "Face-Off") and two bonus questions (aka follow-ups). All questions are worth 10 points (making each category worth up to 30 points), and a wrong answer at any point allows the opposing team a chance to steal but with no scoring penalty whatsoever. Should a Face-Off be missed by both teams, it is thrown out and a new one is asked. One category per round is secretly designated as "Extra Credit," with all question values doubled to 20 points (60 in total).

Two Face-Off Rounds are played in the Qualifiers, while three are played in all subsequent stages. The Qualifiers have four categories, while all other stages have five, and each round ends when every category except one has been used.

A random draw decides which team chooses first in Round 1. Starting in the Quarter-finals , the higher seed picks first and the trailing team at the end of that round chooses first in Round(s) 2 (& 3). In every round, the team that correctly answers a Face-Off in a given category earns the right to choose the next one, regardless of the outcome of the Follow-Ups.

Introduced in the Quarter-Finals, a question with multiple answers is asked (e.g. name the 22 states that lie entirely or partially within the Eastern time zone). with no points at stake. To start, the captain of the trailing decides whether to go first or second. Each player in turn gives an answer (s)he thinks is on the list. A correct answer stays in the round, but an incorrect answer, a repeat or no answer eliminates that player from the round. Each player can also challenge an opposing player to answer, with a successful challenge knocking that player out, but a correct answer from the challenged knocks the challenger out. Last person standing wins the round for the team. The team that loses the round will have to give up a player for the 2 Minute Drill. This is essentially Hot Potato with college students.

NOTE: In the event that the captain sits out the 2 Minute Drill, his/her teammate decide who will be sub-captain.

Prior to the show, each team chooses one of six categories ("majors") to play in this round. Starting with the trailing team, each team has two minutes to answer as many questions as possible in their major. The team members may confer on a question, but the captain must buzz-in to respond. Each correct answer scores 25 points, and a bonus is awarded for every fifth correct answer: 50 on the fifth, 75 on the tenth, 100 on the fifteenth, and so on.

The first three weeks of shows are qualifying rounds, with two complete games per episode and two new teams per game. The two highest-scoring teams from each pair of games advance to the quarterfinals, and the two highest scorers among the remaining six teams also advance as wild cards. From this point on, the tournament follows a single-elimination format, with one game per week for the remaining seven weeks.

In the quarter-finals, the eight remaining teams are seeded into a bracket, starting with the high scorers from all three pairs of games (1 through 6) and ending with the wild cards (7 and 8). For both the semi-finals and finals, the teams are re-seeded based on their cumulative scores for all matches played to that point.

Awards to individual players are shown in the table below.

Four contestants are chosen to receive the Merit Awards based on their character and leadership ability. Alternates receive the same award as their teammates.

A British version of the televised College Bowl competition was launched as University Challenge in 1962. The program, presented by Bamber Gascoigne, produced by Granada Television and broadcast across the ITV network, was very popular and ran until it was taken off the air in 1987. In 1994 the show was resurrected by the BBC with Jeremy Paxman as the new quizmaster. It remains very popular in Britain. The show, and the catch phrase used by Gascoigne (and later Paxman) before each toss-up question, "Your starter for 10," was the inspiration for the novel Starter for 10, and the subsequent film. A New Zealand version of University Challenge ran from 1976 to 1989, and was revived in 2014.

An Irish version of the competition called Challenging Times ran between 1991 and 2002. It was sponsored by The Irish Times newspaper, and presented by Kevin Myers, then a columnist with that newspaper. Over the course of the show, University College Cork had the most wins, with three, while National University of Ireland, Galway qualified for the most finals, winning twice and placing second twice.

On the November 29, 1964 episode, the Virginia Military Institute Cadet team scored the highest score in the history of the NBC-TV series.

At the beginning of each subsequent act, a celebrity (usually an athlete) appears in the form of a video to offer the team their college to which the athlete graduated from some moral support and words of encouragement. Peyton & Cooper's other brother Eli appeared as a Celebrity Root Cameo for the team of students from Ole Miss in the second episode of the 2021 revival.

Columbia University defeated USC by a score of 790-775 to win the championship in the 2021 revival.

The current revival has been recently renewed, with the same host and veteran producer Harry Friedman as the new showrunner.[1]

In 1961, Lowell released a board game version of College Bowl that came with a Mechanical signalling device and an automatic scoring system. 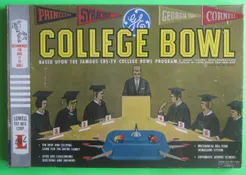 In 1971 (a year after the show went off the air), Doubleday released a second College Bowl book titled The College Bowl Quiz Book, which was written by Carol Nasr; which also listed an index of all the game results and champions.

Clips of the 1960 Army vs. Navy game (West Point vs. Annapolis)
A full episode from April 3, 1960 (New York University vs. University of Oklahoma; Don Morrow hosts)