College Mad House was a short-lived Fun House spinoff for college students. It was hosted by future Academy Award-nominated Oscar nominee and guest star Greg Kinnear. Instead of cheerleaders, a male and a female "referee" assisted with the gameplay. Voiceover artist Beau Weaver was the announcer.

Two teams of four students, each from rival colleges, competed against each other (for example, one episode had the University of Texas and the University of Arkansas). These two teams played messy stunts and answered questions to win a chance to run through an obstacle-strewn Mad House at the end of the show. Like Fun House, there was an equal distribution of males and females.

This version featured much more risqué content and stunts than the children's version, often involving crude college gross-out humor and games that required lewd bodily movements among the participants. The format was basically the same, but with some notable differences, which will be explained as this article goes on.

Like in Fun House, three stunts were played in this round. Unlike Fun House however, these stunts were created to accommodate the four-person teams; the two men from each team faced each other, then the two women, with all four players on each team participating in the third stunt. While most stunts were matches of skill, others relied on luck. Still, each stunt was worth 25 points with a bonus question associated with the stunt (also worth 25 points) to follow.

Instead of a Grand Prix Race, the "Finals Round" decided the game. The teams lined up face-to-face at the podiums (the buzzer light boxes were moved to the top for this round). Jump-in questions from a specific category were asked; getting a question right earned 25 points and the right to hit the opposing player in the face with a pie (or, on occasion, spray whipped cream in the opponent's face). These two players then rotated to the back of the line, with the next two players answering the following question. The team in the lead after a minute and a half (1:30) won the game. If the game ended in a tie, one final question was asked, but without pies; the first team to buzz-in with the correct answer won the game; if they were wrong, however the opponents automatically won (though in earlier episodes, a wrong answer meant the opponents had to answer the tie-breaker question correctly to win). The winning team advanced to the Mad House, while the losing team received $500 for their university, as well as parting gifts.

The format of the Mad House was slightly different from the Fun House. For one thing, instead of the Power Prize attached to a randomly selected tag, the object of the round was to "clean house" by grabbing and collecting 13 tags. And for another, there were only three prize tags, each having two prizes on them, mostly related to each other in some way (usually, the relation was very obvious, providing extra humor).

Just like in Fun House, the winning team had two minutes; however, each player had exactly 30 seconds to collect as many of the 13 tags as possible. So, instead of the clock being set for two minutes, it was always set at 30 seconds, with the clock resetting for each new turn. After one player's 30 seconds ended, he/she had to stop collecting tags wherever they were at, and the next contestant was let in immediately (although a contestant could stay in the house after their turn).

If the team "cleaned house" by collecting all 13 tags before each of them had their turn, they won a trip. Regardless of the outcome, each teammate kept all the prizes that they collected for themselves, while all the cash that they collected (up to $1,000) went to their university.

Score Productions – Most of the music found its way to another Stone-Stanley game show, Shop 'til You Drop.

This is the list of stations the show was on: 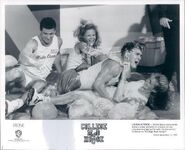 (FOX's) Fun House – the original series that featured kids only.