"This safe holds a jackpot of $185,000 just waiting to be won with the winning combination today on Combination Lock! Here's our host, Marc Summers!"

Combination Lock was an unsold pilot that was supposed to premiere in Fall 2007.

The game was played with two competing teams to which the players on those teams had a special connection. They attempted to guess combinations by answering questions with numerical answers in order to win money. Each question had three items and three numbers; the object of the game was to put the numbers in order from left to right by matching them to those items.

"Match the Family Feud hosts with the two-digit ending of the year they started hosting."

Each round gave the teams two questions each, with the option to play or pass on each one after the items were revealed. Dollar values increase after each pair throughout the game.

The teams faced a game board of five items. Each one was part of a trio of items in the question. The team in control selected an item, then two other items were revealed alongside the chosen item as well as the numbers they go with. Then the question was asked and that's when they attempted to match the numbers to the items from left to right to create the correct combination.

In this round, correct combinations were worth $2,500. Plus the team in control could pass the question to their opponents if they didn't know much about the question.

In this round, correct combinations were worth $5,000. What made this round different was that the team in control now chose for their opponents, so they had to pick items that their opponents didn't know much about, plus the play/pass rule was revoked.

The team with the most money won the game and advanced to play for $25,000 or an increasing jackpot inside a big safe.

In this round, the winning team was shown another group of three items worth $25,000 and also a group of four items worth all the money in what was called "The Big Safe". The Big Safe was an increasing jackpot which started at $100,000 and grew by $5,000 every day it wasn't won.

If the winning team elected to play it safe and go for the $25,000, they kept their main game cash regardless of how they did on the question. But if they elected to go for the "Big Safe", then they would be playing for the jackpot at the risk of losing their main game winnings if they were wrong.

To win either of these grand prizes, the winning team had to enter the correct winning combination on a touch-screen monitor within 30 seconds in Treadway's show and just by saying the right combination on Summers' show. 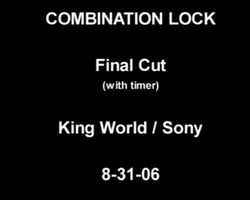 This was supposed to be paired up with a revival of the classic 1970s game show The Joker's Wild that was originally hosted by Mark-Maxwell Smith (and later Alex Cambert), but this also never came to reality as well.

John Ricci Jr., the man who created this pilot, tried out a previous pilot for Combination Lock in the United Kingdom in 1996 with Ross King as the host.

This was the last game show (aired or unaired) distributed by King World before folding into CBS Television Distribution. Its president Roger King passed away that same year.