Cram was a short-lived game show with teams, each composed of two contestants. For 24 hours before taping, the contestants were sequestered in a window store front, with the intent of staying awake and "cramming" various material such as trivia questions and jokes, which they would then answer on the show while attempting physical stunts in an attempt to stay awake.

To start, both teams were given 100 points. Each team was required to talk about one of three articles they had been assigned to read while exercising inside a giant hamster wheel.

The winners of a "3 a.m. coin toss" selected one of three topics (two in Season 2); the other team picked from the two remaining choices. Each player had to talk continuously for 20 seconds (40 seconds total); stopping, stalling, stuttering, freezing, or going off-topic at any point penalized the team five points per violation. If a team said one of eight hidden key words or phrases related to the article, ten points were added to their score. After the first team Ranted, the second team attempted their Rant. However, both teams had to continually walk inside the wheels during both Rants.

For Round 2, each team (starting with the team in the lead) performed a stunt and answered a list of questions for 40 seconds (45 seconds in Season 1). The round tested the teams' ability to multitask after being deprived of sleep. Stunts took various forms, such as demonstrating yoga positions, matching cuts of meat to a picture of a cow, or even firing hard candies at small chocolate bunnies using a slingshot. All of the physical aspects of the stunts were things that the contestants had been given to study overnight. Every stunt had seven physical items. Each successful part of the stunt won 20 points for the team.

While the partners alternated playing the stunt, they also alternated answering a list of questions which all came from “Cram’s Big Dumb Book of Stupid Lists” read by Elwood. After he read the item, the partner had to give the relevant answer to score 10 points. Both parts of the round happened at the same time and never stopped, so one contestant might be assuming a yoga position and answering a question simultaneously if both their turns came up at the same time. Passing on any question was considered a wrong answer. Each list consisted of 12 questions; if the team completed the entire list, they would continue doing the stunt until time ran out.

At any time, the team not participating in the stunt had to continue walking inside their hamster wheel.

After the stunt round, both teams had one last chance to add to their points. Starting with the trailing team, one partner climbed into an exercise bike or rowing machine, and the other would ride a sidecar. The rider had 40 seconds (45 seconds in Season 1) to answer questions/riddles posed by Elwood, each worth 30 points. Before he/she could answer, however, the exercising partner had to reach and maintain a certain threshold, such as a speed of 10 miles per hour on the bike or 100 watts of power output on the rowing machine to keep the green light on. Every passed or missed question increased this threshold. Later episodes added more challenges for the non-answering player, such as blowing into an anemometer strongly enough to register a certain wind speed, or drinking a shot of lemon juice.

At the end of this round, the higher-scoring team won $1,000 and advanced to the bonus round, while their opponents won $500. If the game ended in a tie, a question with a numerical answer was asked; both teams wrote down a guess, and the team that came closest was the winner. Each team's winnings were split evenly between the two partners.

The two winners climbed into a pair of twin beds onstage and donned blindfolds while the lights were dimmed. "Miss Pickwick," the "resident sleep therapist" (Andrea Hutchman), would read the team a new series of facts during the commercial break. In addition to the facts, contestants were also read various suggestions such as "You're getting so sleepy" to make staying awake even more difficult. When the show came back from the break, the team's memory was tested on the facts Miss Pickwick had just read to them.

The lights were turned on in time with a loud alarm, often accompanied by Icey making a loud noise such as banging trash can lids, running a chainsaw, or playing an electric guitar at full volume. A 60-second countdown started, and the team had to get out of bed and run across the stage to Elwood. Before they could answer a question, they had to get all four feet off the ground and onto a balance beam, a small stump, a high wire with a balance bar (from season 2), a pair of surfboards on springs, or a moving log. Every time a player's foot, balance bar, or any part of their body touched the ground, a buzzer would sound and Elwood would stop reading and start the question again from the beginning. Players could answer at any time their feet were off the ground, without waiting for him to finish the question.

The team moved up one level for every correct answer, with the first such answer putting them at Level 1, but they dropped one level down for every passed/incorrect answer. If the team reached Level 5 before time ran out, they split a total of $10,000; if not, they split $100 for each level they had reached (i.e. Level 3 - $300). Cram souvenir coffee mugs were given to $10,000 winners in Season 1, and to all game-winning teams in Season 2.

GSN once had an interactive online game where you were allowed to play along with the show. Prior to this their was a mobile game released by GoldPocket iTV. 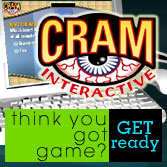 Get ready to play along with Cram interactive!

In 2003, Pacdude Games released their own version of Cram where a topic would be given to you as your have 30 seconds to study it after the information disappears the 5 question pop quiz will began where each question you get right earns you $500 but if you get all five right, then you would win $10,000. 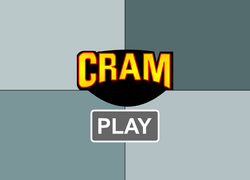 The crammers were placed behind a store window at Hollywood & Highland in Los Angeles. On segues to commercial break, home audiences were shown clips of their study session.

On Sunday night shows in Season 2, there were special celebrity shows in which celebrities played with civilian contestants.

On a special April Fools day show, Marc Summers (then of WinTuition) did the hosting duties, while regular host Graham Elwood acted the part of Ms. Pickwick and reading facts to the winning team.