Dame la Pista (Give Me a Clue) was a short-lived, Spanish-language version of Child's Play.

This was played the same way as Child's Play but with a few differences.

The first round remains the same except now different point values are awarded based on how many clues the person in control of the board gets. Answering the secret word in 1 clue gives 15 points, 2 clues gives 10 points, and 3 clues gives only 5 points.

The second round is different as a new format has been introduced. A question is asked with two answers and the players have to choose which answer the child chose. Just because the answer is correct doesn't mean that the child in the video chose it. Matching the answer is 20 points.

The third round is the same with 25 points for each correct answer.

The bonus round is the same as the first format of the bonus round in Child's Play. One word is shown and the player can use up to three clues to answer it. They must get 5 correct in one minute to win. Winning gives the player $5,000, or only $500 is awarded should the player not give 5 words.

At the time, this show (along with ¿Que Dice la Gente? [What Did the People Say?]) was cancelled after less than three months for unknown reasons. 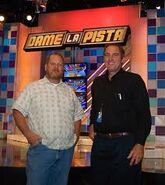 Based on Child's Play by Mark Goodson

The title translates as Give Me a Clue.

Retrieved from "https://gameshows.fandom.com/wiki/Dame_la_Pista?oldid=188237"
Community content is available under CC-BY-SA unless otherwise noted.