The topic of this page has a Wikia of its own: Deal or No Deal Wikia.

Deal or No Deal is a game show with a unique format. No knowledge or reflexes needed, just pure luck and good decision-making skills, based on a Dutch format called Miljoenenjacht (Hunt for Millions). 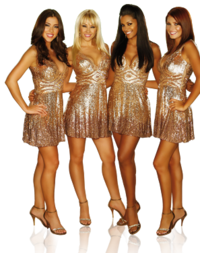 Both Kara and Jacobs help the contestants close the cases instead of opening them. Jacobs, along with Kara, appeared on both the NBC and Syndicated versions.

A contestant faces a series of numbered briefcases, each holding money amounts from a few cents to a top prize. The contestant is instructed to pick one case for them to keep and has to eliminate the others, realizing that whatever amount is in the case they open cannot be in the case they picked at the outset.

Each round progressively removes fewer cases from the game, diminishing subsequently until the final rounds requiring the removal of one case at a time.

After eliminating a certain number of cases, the host and the contestant receive an offer from the mysterious "Banker", a money amount based on which amounts are still on the board. The Banker's goal is to prevent the contestant from winning as much money as possible. If the smaller amounts on the left side are eliminated, the offers will go up; likewise, if the larger amounts on the right side are eliminated, the offers will go down.

If the contestant takes a "Deal", they go ahead and play out the remainder of their game just for fun to see what would've happened if they said "No Deal" and played on for real.

If a contestant rejects the final offer of the game, he or she goes home with the amount that was present in their case.

Twenty-six gold cases being held by twenty-six women containing amounts from a nickel to $2,500,000 are distributed to pre-selected members of the audience. Kielty then offers a mystery amount between $500-$50,000 to the players to bail out; up to five people are allowed to take this offer. Afterwards, Kielty selects a random number and the person holding that case plays the game. During the game, the cases are held by twenty-six different models who are wearing the same pink cut-out sleeveless sweaters, black miniskirts & white go-go boots.

Before the game, the player has the option to switch cases. Then, the first round begins with six cases to be removed, the second round with five more, then four, three, two, and subsequently down to removing one case at a time. The Banker (mainly called "Bank") gives their offers after every round. These offers were given by a mysterious female voice over and a model (mainly Elizabeth) holding a gold case containing the bank's offer to the player.

Contestants were chosen from the studio audience.

This time, the money ranges from 1¢ to $1,000,000 and there all inside twenty-six silver cases. Like the 2004 pilot, the models hold the cases. Occasionally, in the first season, the models opened their case without Howie says "Open the case".

The game structure is the same as the 2004 pilot, except that when two cases are left, the contestant has the choice of switching their case for the one remaining on the stage. For bank offers, Howie opens a clear Plexiglas flip-top box on the contestant's podium exposing a large flashing-red electronic button; if the contestant accepts the deal, he/she presses the button to end the game and win the amount of the deal, otherwise, the contestant declares "No deal!" The contestant closes the flip-top box, requiring the contestant to continue into the next round of the game. Occasionally, contestants will answer it right away without asking the question.

Occasionally, deals offered extravagant prizes in addition to (or sometimes instead of) cash.

The contestants were chosen via a "Deal Wheel" spun by primetime models Patricia Kara and Tameka Jacobs. The wheel had 22 spaces on them; the models spin the wheel and drop a ball as it spins. Wherever the ball lands, the player holding the case with that number will play the game.

The game is the same except that the number of cases (and the people who hold them) was reduced to 22 with money amounts ranging from 1¢ to $500,000, plus instead of models, contestants who are playing for the entire week (minus the ones who have already played and replaced with new ones) now hold the cases. The cases they hold were randomly selected at the start of the week before the show.

The first round begins with five cases to be removed, the second round with four, then two, two, and subsequently down to removing one case at a time.

The option of switching their case for another was now given at the start of the game instead of the end.

In the development stages, the top prize was originally going to be $250,000.

During both runs, special side games, themes, or other elements were put into play. Most involved prize packages with the offers, offering prizes for removing certain cases, or regular cash prizes replaced with vehicles. Some even remove values and replace them with joke prizes; occasionally the banker will offer joke deals. Also, for the 2007 Christmas show, the $25 was removed from the board, thus the player only had to pick five cases for the first round.

Double or Nothing – On two occasions in Season 2, once a deal was made, the player was presented with two large cases. In one was the word "DOUBLE", the other "NOTHING". The player could risk their winnings by picking the case with the word "DOUBLE".

Deal Wheel – On three occasions in Season 3, the player faced a combination of a pachinko machine and a giant wheel. The player was given a ball, spun the wheel, ran up the steps on the side of the wheel, and dropped it through a slot, bouncing through pegs until it landed in a slot on the wheel, doubling, tripling, or halving their deal. Should the deal include a prize, doubling or tripling the deal would award an additional cash prize worth the value of the prize package, doubling it if possible.

Million Dollar Mission – The primary gimmick of Seasons 3 & 4, one $1,000,000 case would be added to the board per game, up to a maximum of 13 (all the amounts on the right half of the board). This produced the show's two $1,000,000 winners. A variation was also used, where the player stood in a booth (Million Dollar Madness). Gold balls would fly around, and the player would grab one to establish the number of $1,000,000 cases.

Winner Take All – Two or three players would play, the others placed backstage so they couldn't see the other's progress. The one with the highest total won the combined total of all players. A variation was once used where a wife played the regular game, while the husband played the online game backstage. The wife had to choose which deal to take.

Speed Deal – Played on the show's 200th Episode, four players competed. The cases would be announced all at once, and the player had 20 seconds to decide once the offer was shown.

The primary gimmick was on occasion, one case would be decorated by one of the show's sponsors. Whoever in the gallery had the case would win a prize, usually worth the value of the case, unless a deal was made and the player had that case.

Splenda Sweetener – When the Splenda case is opened, the next offer after that would be "sweetened" by $10,000, thus automatically giving the contestant that money plus the offer if all cases $25,000 or higher have been removed from play. If the player went home with the Splenda case, they would win $20,000; the only way that the contestant would receive neither situation is if the Splenda was the last case in the gallery.

Banker's Bonus – On the second season, the side game "Banker's Bonus" is played to win more money. If you find a smaller amount on the left side of the board, the next amount, you win another, whatever you have an amount on the right side.

Deal or No Deal…on a cruise ship?[]

In 2012, Norwegian Cruise Lines teamed up with TimePlay to introduced a live interactive version of DOND to its fleet of Freestyle Cruising ships. The onboard rendition uses content from the show allowing everyone in the audience to participate in real-time to beat the banker and win prizes, playing along with the randomly selected contestant who has the chance to win cash. guests participate as a randomly selected contestant or play along as an audience member for $19.95 per person. audience prizes may range from a seven-day cruise to cash and onboard prizes. Guests should consult the ship's Freestyle Daily once onboard for exact times and locations. (NOTE: The live interactive version of DOND is currently offered twice per cruise on all Norweigan Ships, except for Pride of America. Also, unlike the NBC and Syndicated version's number of cases of 26 and 22 with a chance to win $1,000,000 (NBC & CNBC respectively) and $500,000 (SYN.) respectively, the live interactive cruise version only has 20 cases with the top prize being $1,000.) 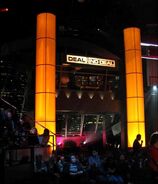 Trade Ad for the NBC version[] 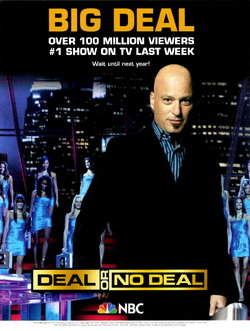 Casting Sheet for the CNBC version[] 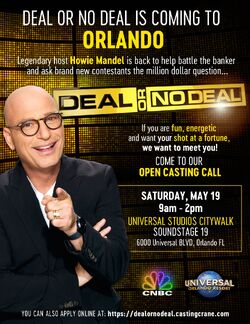 A Spanish language variant of this show entitled Vas o No Vas ran from late 2006 to early 2007.

This is the second American game show to be recorded in studios in other countries for special occasions. It got recorded and shown in the Philippines, Estonia, and South Africa on their respective sets as part of a special "Around the World" themed batch of shows.

The U.S. edition of the hour-long series of the show aired almost 200 episodes for 4 years.

On the syndicated edition of the show, there were over 300 episodes that aired for about 2 years.

Deal or No Deal returned to television on CNBC in 2018 and lasted until 2019.

Although not won, the CNBC version of DOND was the first cable game show to offer $1,000,000 as the top prize.

The Syndicated Version's production move for Season 2 was part of a corporate decision in which four NBC Universal Television Distribution shows moved to Connecticut to benefit from tax breaks.

Who won what? Peep the Banker's List of winners here

Vas o No Vas
Deal or No Deal (channel)

Casting for the CNBC version[]