OPENING #1: "And now, from the Tropicana Hotel in Las Vegas, it's Dealer's Choice, with your favorite dealer, Bob Hastings/Jack Clark!"

OPENING #2: "And now, it's time to place your bets on America's favorite gambling show, Dealer's Choice, with your host, Jack Clark!"

Contestants selected from the studio audience played a series of casino games. They were spotted 100 chips to start, and they could bet as much as wanted, up to the maximum bet in each game.

When Jack Clark took over the show, a new Home Viewer Contest was instituted. Each of the three chosen contestants drew a postcard to see who their home viewer partners were. The winner of that day's game also won a prize for that home viewer.

The "slot machine" board which reveals the contestants, as well as the prizes at stake.

The contestant area for the first part of the run (note the podiums are replicas of dice).

The contestant area for most of the series (note the podiums have faces of playing card kings and queens).

The game was played in four rounds.

In the first round, the contestants could bet up to 10 of their chips; in Round 2, the maximum bet was 25 chips.

In this round, standard casino blackjack rules applied. The idea was to get 21 or get as close to 21 without going over; going over was a bust. All 10s & face cards were worth 10, number cards were worth the number on the card, and aces were worth 1 or 11. 50 chips was the max bet, and all blackjacks paid off at 2:1 (instead of the usual 3:2). The dealer for this game was another randomly selected studio audience member who also had a home partner by drawing a postcard. Like normal casino dealers, the audience member dealer had to stand on 17 or more, and hit on 16 or less. Also the dealer won the players' chips that they bet should any of them lose by busting (going over 21) or by not beating the dealer. Each chip collected by the dealer was worth $1 to the dealer, and his/her home viewer partner received the same amount in a gift certificate. Beating all three players also won the audience member & his/her home partner a bonus prize. Towards the end of the run, instead of winning cash, the dealer (and home partner) won a prize worth the value of the chips they collected.

Host Bob Hastings with an audience player in an early 1974 episode.

Says it all, don't you think?

Here's the end result of this playing of Blackjack.

Here's the end result of this one with Bob Hastings in charge.

This round was dubbed "The Last Chance Round" where, unlike the first three rounds, there were no max bets; so any player could go "all in". Also, the bets were written in secret. During the Bob Hastings era, the game was called "Last Chance", where five cards were revealed and totaled. In the home game (see below), this round was referred to as "Total Up".

Last Chance Round with Playing Cards

Five cards total an amount based on what the cards are. Here, they total 43.

Beware the 7s, 8s, and 9s (just like on Card Sharks four years later) in the game of Hi-Lo.

These games used a machine that mixed up ping-pong balls marked with numbers (usually 1, 2 & 3), and how many of each of those numbers determined the odds of winning the bet. It took 3, 4 or 5 of the same number (or combination of numbers) to end the game.

Off to the races.

These games used 24-spaced Wheels calibrated with various symbols or casino terms each with different odds. The contestants each bet on which symbol or name they thought that the wheel would stop on, and correct predictions won the bet times the set odds. There were three wheel games:

A year before Chuck, DC had its own "Wheel of Fortune". Early in the run, the wheel consisted of card symbols. It was later called "The Mint Wheel."

For most of the run, the wheel used casino terms.

The player with the most chips won the game, and a chance to roll the Bonus Dice. Regardless of who won the game, all contestants received a prize choice according to their final scores (1-100, 101-300, over 300), and (in later episodes), a contestant who finished with 500 or more chips won a car. The prizes were chosen via the slot machine game board.

The prize choices from a Bob Hastings episode.

The prize choices from a Jack Clark episode.

In the Bonus Dice game, the winning contestant rolled a pair of dice with dollar amounts ranging from $50 to $200 on them. Whatever the total amount landed on the dice became his/hers and added to his/her score. However, each die had one spade, and rolling a spade lost all the money from this game, which was why the winning contestant always had the option to stop and take the money after each spadeless roll. If the winning contestant could reach $1,000 or more, (not only did that contestant get to keep the cash during Hastings tenure, but) he/she (also) won a bonus prize.

This contestant won the Bonus Dice round, so Bob's handing her the $1,000 cash.

And he got a hug for it. 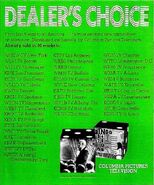 A board game called Place Your Bets! (with a subtitle of "The home version of TV's exciting Dealer's Choice") was released in 1974 by Gamut of Games, which later produced an adaptation of The Diamond Head Game. The reason Place Your Bets! was used was because Parker Brothers had released a board game called Dealer's Choice, which involved used car dealerships, in 1972.

Of note, the box cover has many pictures of the show, including Jack Clark standing next to the original Wheel of Chance (which is also present in the game proper).

During the closing credits, the host would give audience members the chance to win money by playing a high-low card game similar to the one described above.

Unlike most syndicated shows, which normally air in the Prime Time Access slots, most stations aired Dealer's Choice in the daytime slots; very few stations aired it in the early evening slots.

Bob Hastings
A full episode from 1974 (Liz/Dick/Linda, begins during Wheel of Chance)