Debt was a two-year game show hosted by Wink Martindale. Barring a 2008 appearance on Good Morning America where he hosted a segment of Gambit, this was Wink's last game show until the short-lived Instant Recall in 2010.

Three contestants were introduced with the amount of debt they had (usually between $6,000 and $10,000) and the reasons why. After introductions, the debt of the three contestants was averaged to level the playing field. The scores were shown in negative amounts to reflect the debt of each contestant. 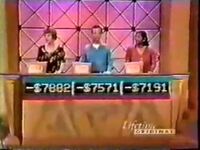 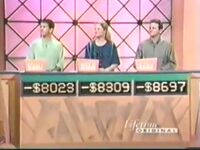 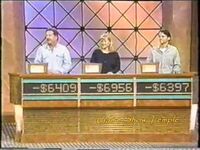 The first round was a Jeopardy!-style round in which the contestants faced a 30 trilon board with five categories, each with five questions with negative dollar values ranging from -$50 to -$250 in increments of $50. The first selection went to the player who had the lowest debt (before averaging the scores). On a player's turn, he/she chose a category and value, after which a "Who am I?" type question was revealed. The first contestant to buzz in was allowed to answer. Contestants were required to start their answers with either "You are…" to receive credit (the contraction "You're" also was accepted). A correct answer deducted the chosen question's value from the contestant's debt but a wrong answer or time running out would add the value, increasing the contestant's debt and will be in danger of putting the player in that much further in debt, and allowed the others a chance to answer by buzzing in. The contestant who answered correctly then have control by choosing the next question from the board. If no one did so, the contestant who gave the last correct answer kept control.

One of the questions in the round was labeled the "Debt-Onator". This was the round's most difficult question in the producers' opinion, and was worth $500, regardless of the face value of the question.

Season 1 General Debt in progress from the shows with the Visa like logo. Gotta love the bottom category.

After the Debt-Onator question is played, the trilon turns back to the graphic rather than the Debt logo.

The players were warned when the round entered its final two minutes. Either time ran out (signified by a fanfare) or all 25 questions had been asked, the two contestants with the lowest debt amounts will move on to the next round while the contestant with the highest debt amount was eliminated and received a consolation prize of a $200 savings bond, along with a piggy bank.

This round underwent a few format changes between seasons:

Season 2 Category Board. Got to love the category in the lower left hand corner.

Season 2 General Debt in progress in Debt-Onator Mode. Got to love this category.

After revealing a category, each contestant announced how many out of five questions he/she could answer to win the money for that category. At the beginning of the round, the trailing player (the one with the higher amount of debt) placed the first bid; his/her opponent then had the opportunity to increase the bid. Biddings were exchanged until either the maximum bid of five was made or a contestant directed their opponent to "Prove it!", forcing them to fulfill the contract. Upon giving a correct answer, the question just played turned into a "happy face", but an incorrect answer or no answer whatsoever flipped the question back to its neutral position in Season 1, and turned into a Red "X" in Season 2. If the controlling player completed the contract, the money was subtracted from that player's debt. If the player was unable to fulfill the contract, their opponent's debt was reduced. The winner of each category earned the right to place the first bid for the next question. Five categories were played in this round, with values of -$300, -$400, -$500, -$750, and -$1,500 respectively.

The contestant with the lowest debt by the end of the round won the game and move on to the bonus round for a chance to pay off their entire debt amount while the contestant that had the highest debt was eliminated and received a $500 savings bond in addition to the piggy bank. Unless if at any point in the round, when Mr. Martindale said that it was a must win situation for him/her when it became mathematically impossible for the one contestant to catch up, even though if he/she were to win every remaining category. That contestant would need to answer the number of questions bidded correctly if that player wanted to stay in the game. If a contestant fell so far behind and failed to answer the number of questions bidded correctly, he/she would be "mathematically eliminated" and the opponent would automatically win the game. The contestant that was unable to catch up would receive the consolation prize automatically.

Round 2 in progress in Season 1 from the shows with the Visa like logo,

Round 2 in progress in season 1.

Another Round 2 in progress from Season 1. (The player has nailed the first category)

Round 2 in progress in early season 2. Note the correct answer needer counter below. The player has nailed the first 2 questions.

Round 2 in progress in season 2. Note the correct answer needer counter below.

The most money a player could eliminate from their average debt in the General and Gambling Debt rounds was $7,650 in Season 1 and $7,951 in Season 2.

The show's bonus round was played in two stages. They were called "Get Out of Debt" and "Bet Your Debt".

Season 1 Bonus Area in neutral mode from the shows with the Visa like logo.

Season 1 Bonus Area in neutral mode, while it still resembles the Visa like logo, some extra squares and a rounded box were added to make the board look like the revised Debt logo complete with underline.

Season 2 Bonus Area in neutral mode. The "Debt" portion of the bonus board is now a monitor.

The Bonus board from the shows with the Visa styled logo is ready.

The Bonus board from the rest of season 1 is ready.

The Bonus board from season 2 is ready.

The Debt of the player in the bonus round from the shows with the Visa styled logo.

The Debt of the player from the later Season 1 episodes.

The Debt of the player from Season 2.

Get Out of Debt[]

The winning player was given an "expiration date" (time limit) of 60 seconds to answer 10 questions in a given category. If he/she passed or missed a question, Martindale asked another one in its place. If the contestant succeeded, he/she won cash in the amount of their original debt. Losing the bonus round meant the player won however much money was deducted from their initial averaged debt.

The category on the top of the board from the shows with the Visa styled logo.

The category on the top of the board from the later Season 1 episodes.

The category in the center of the board from Season 2.

She was the first contestant who won with no time left.

Another contestant won with no time left. She jumped for joy.

A contestant has 9 more questions to go to wipe out his debt in the Get Out of Debt Bonus Round.

In Season 2, after the contestant had won the "Get Out of Debt," bonus round, the word "PAID" had been stamped on the board, behind the game show of the same name, above their original debt, which he/she had knocked out.

After the first part of the bonus round, the player was given the option to "Bet [their] debt". A category selected by the contestant (prior to the show) on their particular favorite subject in the world of pop culture was presented as a one-question double-or-nothing gamble.

The category on the bottom of the board from the shows with the Visa styled logo.

The category on the bottom of the board from the later Season 1 episodes.

The category in the center of the board from Season 2.

Bet Your Debt correctly and you'll win all this money in the briefcase held by security guard Kurt Engstrom (whom we refer to as "Mr. Clean" on the show).

In Season 1, if you bet your debt correctly, the game board would display "WINNER" accompanied by the spinning happy faces.

In Season 2, if you bet your debt correctly, the 9-screen video wall would display "WINNER" behind the fireworks.

Sometimes in Season 2, the Debt logo with the paid stamp as seen on the bonus board was used if a player won both parts.

The bonus board displays the winnings.

During the second season, one week of the show was devoted to celebrities who are all playing for up to $15,000 for their favorite charities.

This week employed the following alterations:

Visa didn't sponsor the show. What's the point of using a lookalike logo?

Unless there is a generic credit card logo to use instead.

When Debt debuted on June 3, 1996, the show's logo resembled a Visa card with three stripes in green, white and red from top to bottom with the word "DEBT" in teal across the white stripe. It was revised on July 8, 1996 with a white box surrounded by a green frame which included the underlined title in red letters inside the white box. 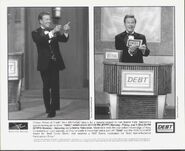 The Debt piggy bank awarded to eliminated players in the first season was actually Hamm from the Disney/Pixar Toy Story franchise (voiced in the films by Cheers star John Ratzenberger). In the second season, a more generic piggy bank with the Debt logo was used.

In Season 2 whenever a contestant was eliminated in the first two rounds, the three phrases: "SEE YA", "BYE-BYE", and "SO LONG" were displayed in their eggcrate contestant's podium.

For the first season, the end game board was shown in the style of the Visa-style logo, with light up overlays above and below the word "DEBT". The "Get Out of Debt" category was shown on the top part above the word "DEBT", and the "Bet Your Debt" category was shown on the bottom part below it. In season 2, it was changed so that the Debt logo appeared as a video monitor which now showed both categories on it, plus additional graphics in which the word "Paid", in the style of a marking by a rubber stamp, would appear if the contestant was out of debt, and the total of money the contestant would take home at the end of the show.

In 1997, Columbia Tristar Television sued the creators of Debt due to similarities to the gameplay that was on Jeopardy!

Shortly after Lifetime cancelled the series (for the reason that more men were watching the series than women, the network's target audience), reruns were sold to only a handful of local stations, in preparation for a potential syndication run (plans for the show included paying off people's mortgages), but the show was never revived. The reruns all featured a different opening featuring a montage of players winning big and other moments with Martindale saying: "It's one game show where 3 people who are really broke just like you folks at home compete to have us pay off all of their bills and go home with nothing. It's Debt. Here are today's players." The intro then continues into the players introductions. These episodes would add an additional copyright.

Two game show hosts appeared as contestants on Debt: Larry Toffler, who had hosted the syndicated version of Finders Keepers in the late '80s, and Frank Nicotero, who later went on to host Street Smarts. Toffler would later win $100,000 on the FOX game show Greed.

In a Season 1 episode, Ryan Hopak celebrated a $17,394 win by ripping off his toupee, throwing it on the floor, then dancing around the hairpiece.

Early episode with a "Visa"-esque logo

Another early episode with a Bet Your Debt big gamble question loss
Contestant Ryan Hopak rips off his toupee.