Dog Eat Dog was a short-lived stunt and dare show that was loosely based on the British series of the same name, where people perform zany stunts to avoid being sent to "The Dog Pound" and trying to win $25,000.

Before the show, six players spent a day together in a training camp. On the show, the six players will be shown a challenge. After Burns explained how a challenge works, the players will then vote for the one who is most likely to fail. The player with the most votes must face that challenge. If he/she fails, that player is sent to the "Dog Pound.” If he/she succeeds, someone who voted for him/her gets to be sent to the Dog Pound in his/her place.

The game is played in this manner until there are only two players remaining, who will go against each other head-to-head on the fifth challenge. The player who won that challenge becomes that night's "Top Dog,” while the other is sent to the Dog Pound.

Some of the one-player stunts on the show included:

GSN had their own online interactive game based on the show at some point. 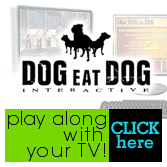 The following are a list of countries that have aired their versions of Dog Eat Dog:

In Season 1, a contestant was hospitalized after failing unconscious during a challenge where he had to hold his breath underwater for two minutes. The contestant sued NBC claiming that the mechanism failed and caused him brain damage. This also resulted in only four members participating in the final challenge; these four failed to win the money.

This was the first American adaptation based on a British game show that Brooke Burns hosted. Ten years later, her second was The Chase that aired on GSN from 2013 until 2015.

Former Price model, Gwendolyn Osborne-Smith briefly appeared in a 2003 episode (although her name was never mentioned) in a neon pink bikini demonstrating a stunt involving a contestant in six-inch heels having to walk down a balance beam that was suspended above the water tank to retrieve a purse at the end and must walk back to the starting point without falling off. Additionally, this was the first game show based on an international format in which a male contestant has to do a stunt in high heels, the second was My Partner Knows Best in 2018.

Several episodes not shown on NBC were later aired on Game Show Network (or GSN).