1981 OPENING SPIEL:
"From Hollywood, it's all fun and excitement as we play Dollar a Second! And here's the man who gives the money away, Bob Eubanks!"

Dollar A Second was the wild and crazy quiz/stunt show where contestants won money for every second they stay on the show.

Solo contestants or teams of contestants would play a game of trivia and stunts. They would earn one dollar for every second they stayed in the game. Host Murray would ask questions under a specific category, and the contestant(s) playing would answer those questions.

As soon as he/she/they got a question wrong, they had to pay the penalty by performing a stunt, which required choosing from five items, one of which resulted in a mess or embarrassment. Picking one of the four safe items would beat the penalty and allow the contestant(s) to continue playing, but if the player had to pay the penalty again, that choice would be removed. One such stunt had one player placed on a slide that went down towards a small above-ground swimming pool, and the partner had to pick one of five telephone numbers, one of which nobody on the other side would be available to answer. Should someone be there on the other end of the line, the person who dialed the number would say "I've got somebody!" and the penalty was beaten.

Failure to beat the penalty would end the game, but the contestant(s) would keep whatever money they had won at that point, and sometimes additional money based on the number of correct answers given.

During each game, there was a special feature called the "Outside Event". The "outside event" was something that when it occurs, the game would end and the contestant(s) would lose all the money they made while playing. For example, the couple had to pick an envelope that contained the number of round trips a model train could take, and when it reached that number the event would be completed; however, they wouldn't know how many trips that train had made until that mystery number was attained. If at any time the outside event was completed, the game would end and the contestant(s) currently playing would lose all the accumulated money, but would receive money or a consolation prize based on the number of correct answers they had attained.

Players were allowed to stop at any time (except when paying the penalty) and keep whatever they had earned up to that point.

Aside from having a new set (most notably a visible onstage money display), Chuck Barris now producing, and Newlywed Game host Bob Eubanks hosting, the game stayed pretty much the same; however, there were at least two differences:

Based on the French show Cent Francs la Seconde (100 Francs a Second).

A board game was manufactured by Lowell in 1956, with host Jan Murray on the cover. 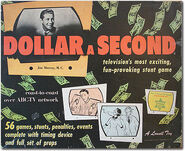