Don't Forget the Lyrics! was a sing along game show where players have to fill in missing lyrics to win big.

The primary difference between Don't Forget the Lyrics and other music-based game shows was that artistic talent (such as the ability to sing or dance in an aesthetically pleasing way) was irrelevant to the contestants' chances of winning. In the words of one of their commercials prior to the first airing, "You don't have to sing it well; you just have to sing it right," a quote also used by The Singing Bee.

The structure of the show was similar to another FOX game show Are You Smarter Than a 5th Grader?. Contestants were given nine categories (such as "pop", "The Rolling Stones", or "divas"). Contestants would pick one of the categories. They were then given a choice of two different songs. The contestant then chose one of the songs and were told how many many missing words they would have to provide. The band would start to play the song and the lyrics were displayed on large monitors in front of the contestant, who would sing karaoke style. At some point, the lyrics were shown as blank spaces and the music stopped. The contestant then filled in those blank spaces. They could then decide to "lock in" the lyrics (which was the same effect as saying "Final Answer" on Who Wants to Be a Millionaire?), choose one of the "backups", which were answer-assistance options that were similar to lifelines, or choose to walk away with the money they had won to that point.

Sometimes a few words would turn green at a time rather than all of them at once, creating suspense; this was often done if one or more words would turn out to be wrong, and the incorrect word or words generally would show up in the final reveal. If the words were all correct, the contestant's score would increase to a higher amount, accompanied by music previously used for a correct answer on Show Me the Money (a shorter version of that music accompanied a reveal of part of the lyrics). Lyrics that turned red were incorrect (and if any were shown, this was accompanied by music previously used for an incorrect answer on Show Me the Money) and would result in different situations depending on the version. If the contestant locked in incorrect lyrics before hitting the $25,000 mark, all money earned to that point was lost; going for $25,000 after winning $10,000 was the last point in the game at which a contestant could leave with nothing. After passing the $25,000 mark, the contestant was guaranteed that amount; incorrect lyrics between the $50,000 and the ninth songs would knock the contestant's winnings down to $25,000. After nine correct answers, contestants could choose to go for the "Million-Dollar Song".

Similar to the "3 lifelines" concept from Who Wants to Be a Millionaire?, there were three answer-assistance options, or "backups", that the contestant could use for help if they were stumped.

Each backup could only be used once, and while the backup singer would still be available for the Million-Dollar Song (if it had not been already used) the other two backups would be revoked. Contestants could be required to use up their backups on the ninth song if they had not done so already, because there was a warning that, if a backup wasn't used on the ninth song when the backup(s) was/were available, the remaining unused backup option(s) would be automatically used (except for the backup singer) after the lyrics were locked in.

Contestants who answer the first nine songs correctly could risk the money for the Million-Dollar Song. There was no other information on the song revealed to the player other than that the song was a #1 hit from one of the nine categories featured in their game. On the first FOX version, the $25,000 guarantee was immediately increased to $100,000. Any remaining backups (excluding the backup singer) were revoked (taken away or out of play) after locking in the ninth song, and the other information was only revealed if the player decided to go for it. After the contestant sang, they could change it if they wanted, but they had the option to lock in something or walk away. If the lyrics to the Million-Dollar Song were incorrect or the contestant opted to walk away by not locking in the lyric, the contestant would leave with the guaranteed money. If correct, the contestant won $1,000,000.

The format was based on the syndicated changes to fellow 20th Television game show Are You Smarter Than a 5th Grader?. One contestant played the entire show, and would play four songs from four different categories. Each song correctly increased the player's winnings as follows:

If any incorrect lyrics were sung, no money was won or lost.

After playing all four categories, the player could attempt the Encore Song or stop. If the player won $10,000 at this point, the Encore Song was worth $50,000 if sung correctly, with a $1,000 guarantee in case of a miss. If a contestant gave an incorrect answer at any previous level, the player's winnings would be doubled should he/she correctly sing the Encore Song. Again, the song was a #1 hit from one of the four categories and a loss of $5,000 or less gave them a custom MP3 player (this was the only way to leave with no cash).

A Board Game based on the FOX version was released by Parker Brothers in 2008. (NOTE: Wayne Brady is on the cover of the game)

An iOS game based on the FOX version was released by Hands-On Mobile in 2009. (NOTE: The game features a simulated Wayne Brady as its host)

Poster for the Nash era[] 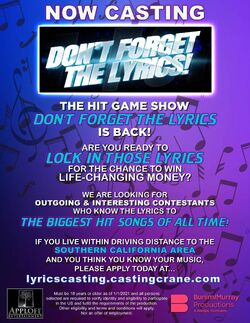 Countries that have done their own versions of Don't Forget the Lyrics! include:

This was the first game show to have a black man (Brady) to be replaced by a black woman (Nash).