Don Adams' Screen Test was a game show where people were pitted against one another in challenges that required them to reenact a scene from a classic movie and then judged on how well they reenacted it.

The game involved two 15-minute periods, in which a random person would be asked to act out or re-enact a famous Hollywood movie scene (such as the race scene from the 1964 movie Viva Las Vegas). They would then be helped out by Adams and guest celebrities that appeared on the show. Usually, Adams would direct; however, on occasion, he would act along with the contestant and the guest celebrity, and another celebrity would direct. Blunders such as forgotten lines, failures of props, and celebrities ad-libbing would provide more comedy.

A second contestant would do the same. At the end of the show, both contestants would see their screen tests, and the contestant whose screen test was judged to be better by a well-known director (different for each episode) was declared the winner and given a walk-on part on an upcoming movie or television show. 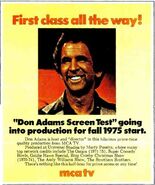 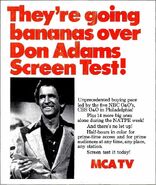 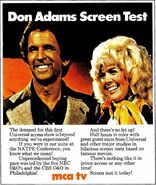 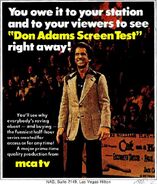 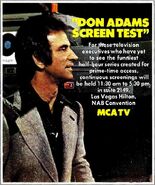 The series is held in its entirety (including the hour-long pilot) by Universal Television;[1] however, it has not been seen since its original airing.

Clips of the pilot First 12 minutes, with James Cann
Segment with Connie Stevens

Clips from the series Screen test with Doug McClure
Various bloopers, seen in the 1984 special Foul-Ups, Bleeps and Blunders