Dough Re Mi was a musical game show similar to Name That Tune.

Three contestants competed to identify song titles using the first few notes. Each game consisted of three songs worth $100, $300, and $500, respectively. The contestants were each given a $200 bankroll to start the game. In each round, each contestant was given one opportunity to guess the title of the song after the first three notes were played. If the song title was guessed correctly, the contestant won the value of the song.

If nobody could identify the song, the fourth note was then put up for bid in a similar format to The Price is Right. Each player, one at a time, would take turns bidding any amount of their bankrolls until either a bell rang or all players had stopped bidding.

The player with the most money in their bankroll following the third song won the game.

This show also had a home audience participation segment wherein on Mondays two notes were played for the home audience to try and guess the song and send in a Postcard with that title. On Tuesday they would play three notes for the same purpose and continue through the week. The following week a prize was awarded by selecting a winning Postcard.

Occasionally, celebrities would appear and play the game for charity. Among the celebrities who appeared were Lou Costello, Florence Henderson, Jaye P. Morgan, and Peter Marshall.

Partly due to being developed by Jack Barry and Dan Enright, Dough Re Mi was one of the games caught in the quiz show scandals. Like Concentration, the show was bought by NBC and became an in-house production. 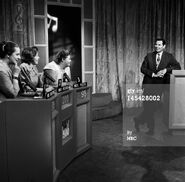 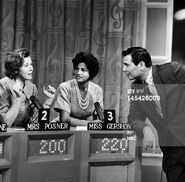 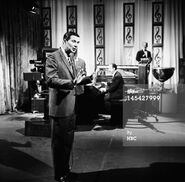 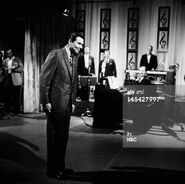 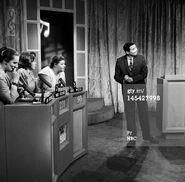 A board game, complete with an eight-key xylophone, was released in 1960 by Lowell Toy Mfg. Since its release, the game has become very hard to find - a copy complete with the xylophone is both very rare and, when a complete copy surfaces, very expensive.

Dough Re Mi at BoardGameGeek

Intro of an episode