Everybody's Talking! was a people-on-the-street game show the featured contestants trying to guess what the general public was talking about.

The object of the game was for three contestants to watch a film of people on the street making short descriptions of a person, place, or thing. The point value of each round started at 100 points, then counted down one point approximately every second. The first player to buzz-in with a guess as to what "everybody's talking" about froze the point value of the round. If the other two players had a guess, they had to buzz in and make it before the subject was revealed (and with the point value frozen, they didn't know when this would be). The player with the correct guess (if any) got the points, and subsequent rounds were played in the same manner until one player scored at least 100 points. The first player to reach 100 points won the game, received $1 for every point earned (had his/her winning score turned into dollars) and went on to play the bonus round, in which a correct guess doubled the point value to form a cash payoff when the film was stopped.

By May, the contestants were replaced by three celebrities playing for viewers at home; the program opened with each drawing a postcard backstage before entering the studio. The object remained the same, with the first to reach 100 points also winning a prize for that home viewer (the other two home viewers received a consolation prize).

A board game based on the show was released by Watkins-Starthmore in 1967. 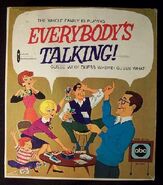 TV producer Jack Barry created this show alongside Jerome Schnur, but was still banished from television since many people still thought that he was behind the quiz show scandals. So Barry's name was kept off the credits, and Schnur's company produced it alone.

This was the last black-and-white TV show to air in America before the nationwide switch to color television in 1968.

Jack Barry, Wink Martindale & Charlie O'Donnell would wind up being together again on Wink's most successful show, The New Tic Tac Dough.