The topic of this page has a Wikia of its own: Family Game Night.

OPENING SPIEL #1 (Seasons 1-2): "Tonight, we're playing the games that you love to play with your family in a whole new way... (insert five games of the day). The games are bigger, the stakes are higher, and (the) moments are priceless. Right now on Family Game Night! And now, here's your host, Tooooooooooooooooodd Newton!" - Burton Richardson

OPENING SPIEL #2 (Season 3): "Tonight, members of our studio audience are here to play some of your favorite games in a whole new way... (insert four games of the day). The games are bigger, the moments are priceless, and one lucky family might just leave here with a brand-new car. Right here on Family Game Night." - Todd Newton

OPENING SPIEL #3 (Seasons 4-5): "Tonight, members of our studio audience are here to play some of your favorite games in a whole new way... (insert five games of the day). The games are bigger, the moments are priceless, and one lucky family might just leave here tonight with a brand-new car. Plus, a celebrity family will play one of our games, right here on Family Game Night: Celebrity Edition! And now, here's your host, Toooooooooooooooooodd Newton!" - Andrew Kishino

NOTE: Only words in bold are in the Celebrity Edition of the show in Season 5.

Family Game Night was the family game show in which America's favorite classic board games come to life, and presented in new ways never seen before.

Two families (one dressed in red and the other dressed in yellow) compete in a series of games based on Hasbro's most popular board games. Five games are played each show. Each time a family wins a game, they win a prize (in season 2, they were referred to as "Monopoly Party Prizes") plus a choice of one of the 21 Monopoly Crazy Cash Cards from a shelf at what's called the "Monopoly Crazy Cash Corner" on the left of the set. Each family starts with one card each.

In addition to winning a prize, the youngest child team captain of the winning family of each game, selects a "Monopoly Crazy Cash Card"; each one is printed with a Monopoly playing piece, and each containing random cash values. Most of them have amounts between $100 & $1,000 (in $5 increments), some of them have amounts more than $1,000, and only one had the biggest amount ranging between $7,500-$25,000. At the end of the show, the cards are entered into a "Monopoly Crazy Cash Machine" to reveal the value of each card. Upon revealing the dollar amount, Monopoly money would spit out of the machine and onto the stage floor; families would usually go wild in it whenever it occurred. The family with the biggest cash total wins a trip. If both families are tied, both families win the trip.

If the card with the biggest amount was not chosen nor revealed, Todd would reveal which card it was.

Regardless of how they did, both families get to keep all the cash & prizes they won on the show.

Instead of just two families, multiple families (regardless of color) randomly selected from the studio audience. In Season 3, they played four games, Seasons 4 and 5 played five games. Some were head-to-head and some were solo games. In Seasons 4 & 5, losing teams received $100. Six of the games seen in the first format remained though two of them were played differently. All of the families who played get to choose a combination card from a set held by a statue of Rich Uncle Pennybags/Mr. Monopoly, to be used for the Community Chest. Each card consists of three colors out of five (red, blue, green, yellow and orange) One of them has the right combination that opens up the Community Chest and gives the family that picked it the right to play the revised Monopoly Crazy Cash Card game. In Season 5, celebrities and their families played one game for charity; they were guaranteed $5,000 with a win awarding an additional $5,000.

These are a list of celebrities that appeared during the celebrity season:

After all the games have been played, the families that played those games all tried out their combination cards. In season three, the colors were on three wheels to which the kids spun to the appropriate colors. In season four the chosen colors appear in lights which is done by sticking the chosen card into the slot. After the combination was set, the kid of the family pressed the button to see if the combination worked. Whichever family drew the right card with the right combination and opens up the chest plays a bonus round for cash and a new car.

The winning family faces the Monopoly Crazy Cash Machine. Instead of 21 cards, there were 16 cards arranged in a 4x4 grid. Nine of the cards were cash cards and one was a WIN card located on the top row. The remaining six cards were GO TO JAIL cards: one in the 2nd row, two in the 3rd row and three in the top row. The winning family tries to work their way to the top row. If the family picked a cash card, they won the amount of cash on the card and goes to the next row above to pick another card. If the family picks a GO TO JAIL card the game is over. But if they reached the top row and found the WIN card, they won a new car (Jeep Patriot in Seasons 3 & 4, Ford Escape in Season 5). Regardless of the outcome, the winning family kept all the cash they won; and if they didn't get into the top row, Todd would reveal which one was the WIN card. 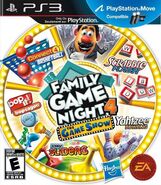 Despite having a four-year only run, this was the second most successful "board-game-turned-game-show" in history, the first was Scrabble (1984-90 version) hosted by Chuck Woolery and the third was Celebrity Name Game hosted by Craig Ferguson in 2014.